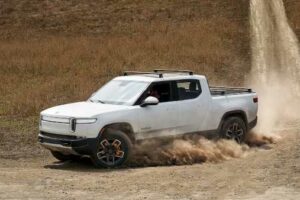 Much to the relief of reservation holders, the first deliveries of the Rivian R1T Launch Edition electric pickup truck are finally due to begin this month. In addition to the cool things we already know about the electric truck, as well as what we’ve gleaned from Rivian’s configurator, RivianOwnersForum.com reports that Rivian has applied for a patent on a so-called “K-turn mode.”

Rivian’s K-turn mode is a system that reportedly enables its vehicles to essentially tighten up the turning radius and make impossible turns possible. Presumably—and ironically—this mode avoids any need to futz with a k-turn (also known as a three-point turn) because of its ability to turn the Rivian on its axis.

The conventional transmissions of gasoline and diesel trucks don’t allow for the front and rear wheels to rotate in both Drive and Reverse simultaneously and independently; the ability to control backward torque to the rear wheels and forward torque to the front wheels, based on system input, is an advantage for electric vehicles.

It’s not the first time we’ve seen this kind of tight-turning action from the Rivian. Back in December 2019, Rivian released a video of its “quad-motor tank turn”, which showed a Rivian R1T spinning itself silly in the dirt. Perhaps this K-turn mode takes that concept to the pavement by adding a steering component—or maybe it’s some extension or fulfillment of that technology.

A “front dig mode,” which provides forward torque to the front wheels of the vehicle while applying resistance to the inner back wheel and forward torque to the outer back wheel, is applied on turns that are tight, but not tight enough to require full steering wheel lock. The front dig is kind of like a turn booster, perhaps acting like a quad-steer setup. It seems like the K-turn mode activates when you exceed steering lock. We’re uncertain how the system will engage the K-turn mode—maybe you hold it at lock to activate, or it locks and then moves slightly beyond? However it activates, very tight turns that would normally require reversing would be achieved in one shot thanks to the Rivian pivoting around the rear axle.

How does this look in real life? We’re not sure, but we have some guesses. Dread making three-point turns on congested and moderately narrow streets? Parking lot too tight to park in a spot? Accomplish the unthinkable in one shot. Off-road trail comes to a dead-end or worse yet, meet another rig head-on with no room to get around? No more fear of wedging your truck or SUV between two stout trees (insert Austin Powers golf cart scene) or careening down a hillside after leaving it in reverse for a split second too long during one of way-too-many K-turns. It seems that if any section of the trail was wide enough to fit the length of the Rivian, it could shimmy itself 180 degrees. It seems plausible that the K-turn mode could help out with numerous off-road obstacles that require tight steering and intricate navigation.

Not to hate on Rivian’s potential K-turn mode, but we’re inwardly hoping the company patents a J-turn mode, too.