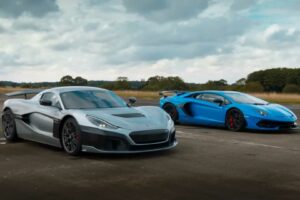 We had the chance to drive the Rimac Nevera this summer and we were absolutely thrilled by how fast that machine was. The truth is the hypercar from Croatia “isn’t just fast, it’s a different genre of speed entirely” – and there’s no better way to illustrate this than a drag race with one of the fastest supercars on the planet. This is where a new video from TopGear comes to help us.

The British show is preparing for another season and in episode one, our colleagues are reviewing the Nevera. Chris Harris sits behind the wheel of the all-electric land rocket and you can clearly see he is very, very impressed with the capabilities of the Nevera. “That’s not driving, that’s an out-of-body experience” should tell you enough about what’s the feeling under full acceleration. But, to put things into perspective, Harris drag races the Nevera against a Lamborghini Aventador SVJ.

Powering the Aventador SVJ is a 6.5-liter V12 with a peak output of 759 horsepower (566 kilowatts) and 531 pound-feet (720 Newton-meters) of torque. By any standards, it’s a very quick vehicle and until the Aventador Ultimae arrived, it was the fastest Aventador in the company’s lineup with a top speed of 219 miles per hour (352 kilometers per hour). The Nevera, however, is from a different league.

The all-electric hypercar from Croatia has four electric motors, one for each wheel, generating a peak power of 1,914 hp (1,427 kW) and 1,741 lb-ft (2,360 Nm) of instant torque. The Nevera launches to 60 miles per hour (96 kilometers per hour) in a ridiculous 1.85 seconds – and while Rimac says there is room for improvement – this is more than enough to annihilate the Aventador SVJ on the straight line.

There’s no way you would not be impressed by what you are about to see in the video at the top of this page. And if you are so impressed that you end up browsing Nevera’s website and the Nevera’s online configurator, bear in mind the Croatian company has plans to build just 150 examples of the hypercar. Each one of them will cost around $2 million and the first year of production has already been sold out.