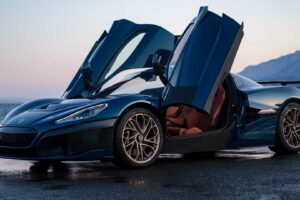 As many legacy automakers and startups across the globe move forward with electric cars, it’s not uncommon for them to look to Tesla for ideas about what works, as well as what to avoid. With that said, a recent report from Automotive News Europe suggests that Rimac is going to follow suit with Tesla’s 4680 battery cells … sort of.

Tesla announced at its Battery Day event a few years ago that it was going to introduce new and innovative battery cells that would be larger and more energy-dense than current cells. Much more recently, the US electric automaker started using the cells in Model Y crossovers coming out of its new factory in Texas. Meanwhile, other battery makers are prepping to produce the cells for Tesla.

Tesla’s 4680 battery cells are 46 mm in diameter and 80 mm tall. Rimac reportedly aims to develop a battery platform that’s based on 46 mm cylindrical cells. However, it appears the Croatian automaker will experiment with various cell heights.

Rimac Technology’s head of research and advanced engineering Wasim Sarwar Dilov shared that the automaker hopes to ramp up battery pack production significantly, with targets of some 40,000 packs in 2023 and 200,000 by 2028. Dilov also revealed that Rimac is already in talks with three different battery producers to manufacture cells for the new pack platform. He told Automotive News Europe:

“The new module platform forms the basis of most of our future programs.”

“Previously we just tried to find the best cells we could. If you are trying to get cells for a few hundred cars you can do that. Now as we significantly ramp up to volumes of hundreds of thousands of units, we are in a different era.”

Rimac is in the midst of projects with many automakers. The company has disclosed that it will supply battery packs to the Aston Martin Valkyrie, along with Koenigsegg, a Swedish company that produces high-dollar supercars.

Interestingly, Rimac is also already working on structural battery packs, another component of Tesla’s new Model Y crossover. Dilov revealed that Rimac aims to slim down the battery pack itself, regardless of the cells. The goal is that 75 percent of the total battery pack weight will come from the cells alone. Rimac hopes to launch this new structural pack with the 46 mm cells by 2025.

Automotive News Europe notes that the Porsche Taycan’s battery pack is 63 percent cells, the Tesla Model 3’s is 64 percent, and the Rimac Nevera’s is 67 percent. Dilov explained that the higher Rimac can get the percentage, the less unnecessary weight the car will have, which will be a win across the board.