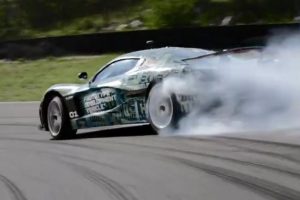 We first got a good look at the Rimac C_Two at the 2018 Geneva Motor Show, but the company has yet to release the production-spec version since then. Don’t worry, because the company is still hard at work to bring the successor to the Concept_One to market, as seen in its latest video.

The short clip features the Rimac team discussing the car’s development and driving dynamics, with company founder Mate Rimac heard saying, “we are not going to compensate the vehicle dynamics with a torque vectoring algorithm. The car has to drift and slide and drive really well on its own, before we put torque vectoring on it.”

Following this, all eyes are on test driver Miroslav “Mrgud” Zrncevic to demonstrate just how well the car performs, and he delivers by drifting the car on a track without any driver aids in play. There’s not a whole lot of noise because this is an EV after all, but it looks like slaying tyres is not a problem for the C_Two.

The production C_Two was originally supposed to make its debut at this year’s Geneva Motor Show, but due to the Covid-19 pandemic, this has been delayed. The health crisis also pushed back the construction of a new production line for the EV, which was only recently completed last month.

At full capacity, four units can be built every month at the facility, but a full debut should still take some time, as the company will still need to prepare prototypes for testing and homologation purposes as well as several pre-production models beforehand. All in all, 150 units of the C_Two will be built, each starting at around two million pounds sterling (about RM11 million).

The primarily carbon-fibre and aluminium construction also sees a kerb weight of 1,950 kg, with most of the heft coming from the large 120-kWh battery pack, which can be recharged with the 22-kW on-board charger or 250 kW DC combo fast charging.

Along with a futuristic cabin, the car also comes equipped with plenty of Level 4 autonomous-ready hardware, including eight on-board cameras (including a front stereo vision unit), a lidar sensor, six radar emitters and twelve ultrasonic sensors.