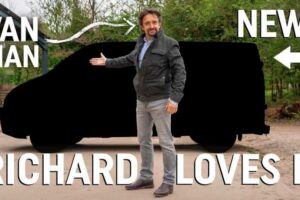 Richard Hammond must be getting old. He has a history of owning crazy fast and extreme machines but lately, he is focusing on more practical, economical, and easy-to-live-with vehicles. And his latest daily driver is seriously unexpected, to say the least.

Hammond is featured in a new Drivetribe video where he shows off his new ride. It is not a fast sports car or a luxury limo, for example, but a rather humble Ford Transit Custom van. But why, you may ask? Because he needs something to run his new business with as he now has a shop that restores classic vehicles.

Hammond admits that driving a modern van feels like driving a very good car from some 15 years ago. The handling is good, the cabin is comfortable with satellite navigation and automatic climate control, and there’s plenty of space to carry your stuff around. For Hammond, however, a van is also a time machine.

During the video, the former Top Gear presenter tells us the story of how he first drove a van when he was just 21 and struggled to find a proper job as a radio host. He found a job in which he had to deliver furniture with a brand new Renault Traffic. He was so excited about taking command of a brand new vehicle that he got a book to learn more about how to explore a brand new machine.

Hammond describes himself as a leisure van driver, not a professional van driver. In the video, he also tells the story of how he used his Renault Traffic as a camper van during the weekends and why he has such a strong connection with vans in general. But most of all, driving a van reminds Hammond that driving is mostly about getting you and stuff from where you are to where you need to be. And a van is designed especially to do that.