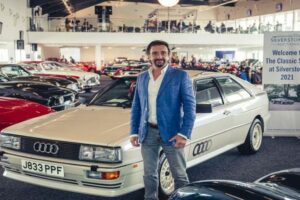 The Grand Tour presenter auctioned off five motorbikes and three cars from his own collection. This was done over the weekend at Silverstone Auctions in order to raise money for his newest endeavour, The Smallest Cog.

Through the sale of his eight vehicles, he raised a whopping £231,000.

It is number five of only 48 examples built and comes with a full engine rebuild and is in superb condition inside and out.

On his Instagram story, Richard Hammond said: “Hello, I’m at the Silverstone Classic Auction, it’s Sunday morning and I’m emptying out my toybox.

“Reasons are complicated, there’s been a bit of a bump in the road with my huge workshop project.

“If you want to find out why and how it goes, well the show will be on air later this year.

“Meanwhile, wish me luck because this is going to hurt a bit. But it’s all for a good cause.”

Motor shows to bounce back after ‘rollercoaster ride’ 18 months [COMMENT]

His five motorbikes sold for a combined total of £72,719.

Headlining his motorbike collection was his 2019 Norton Dominator 961 Street Limited Edition which went under the hammer for £25,650.

The limited edition model was number 50 out of only 50 made, which Hammond bought himself for his 50th birthday.