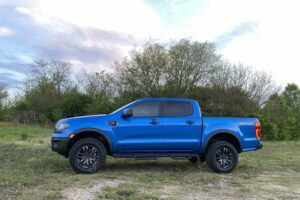 If only we lived in the world car marketers are trying to sell us. We could be the boldest, most capable, most all-new-first-ever versions of ourselves. Instead, after a weekend schlepping my kids around the Midwest, I felt like the baldest, most incapable, tired-ass version of myself.

That was despite being fortunate enough to test drive the 2021 Ford Ranger Tremor.

But sometimes, life gets in the way of work and instead of splashing through mud ruts, clambering over rocky ridges, launching over dale or dell, or spraying rooster tails of sand, I mucked 480 miles of interstate in 45 hours, tailgated with a cooler of Coors in a megamall parking lot, and made too many trips to stores, fields, and hockey rinks because that’s what I signed up for as a parent.

The off-road package on the Ranger mid-size pickup truck is an FX4 on PEDs. It might not have been put through its adventure paces with me, but it provided plenty of insight on how it behaves on those weekends when adult responsibility snuffs out marketers’ fantasy promos. Here’s what I did and didn’t do in the Ranger Tremor. 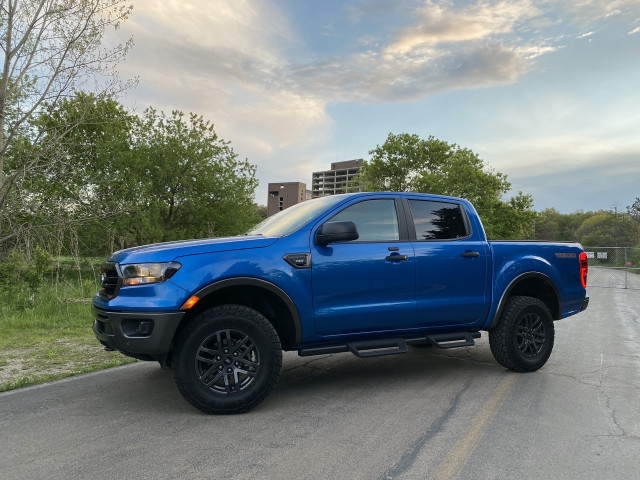 The Ranger Tremor looks cooler and behaves meaner than the FX4 package offered on other Rangers. Offered only with a crew cab and 5-foot bed on XLT and above trims, the Tremor package adds 17-inch aluminum alloy wheels painted black, sturdy black hoop steps, black flared wheel arches, black front and rear bumpers, a black steel bash plate, black grille with red accents, and twin black tow hooks front and rear. It’s the best-looking Ranger yet, and the black and blue combo appeals to our visual and physical sense.

The EPA rates the 2021 Ranger Tremor at 19 mpg across the board. We were right there. Despite the 18-gallon tank, we filled up twice. Those knobby General Grabber all-terrain tires make big contact, and the lack of an air dam doesn’t help. 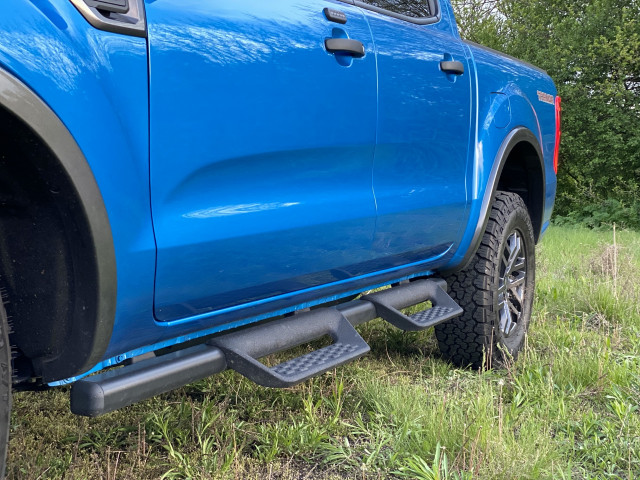 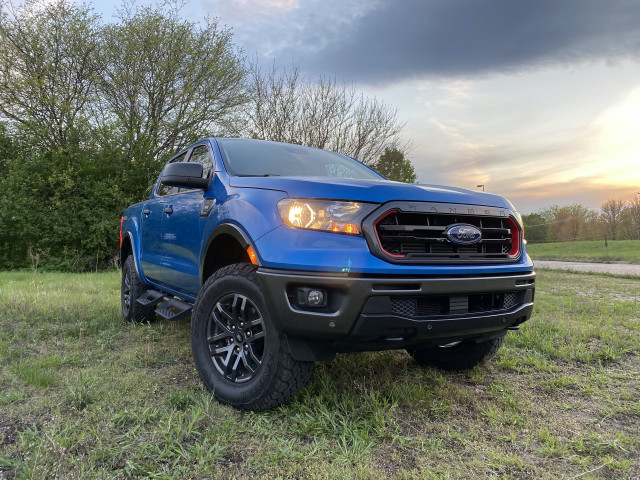 The Ranger Tremor uses the same 2.3-liter turbo-4 that will power the 2021 Ford Bronco. It makes 270 hp and 310 lb-ft of torque, and with a decisive 10-speed automatic transmission it can tow up to 7,500 pounds. Shifting it to S delays the shifts and gives it a spryness that’s a nice change of pace. Lag is minimal and it doesn’t lack power around town or on the highway.

The Grabbers with a higher 70R profile than the FX4 or base Ranger return plenty of road noise, and with all those highway miles it rides and sounds like a truck. The lifted suspension and 32-inch tires added 0.8 inches more ground clearance than the base Ranger to 9.7 inches total, and plenty of road noise. Yet the Fox monotube dampers with piggyback reservoirs and retuned front and rear springs were compliant enough to let one passenger nap in the vinyl bucket seats, so it didn’t ride harsh. 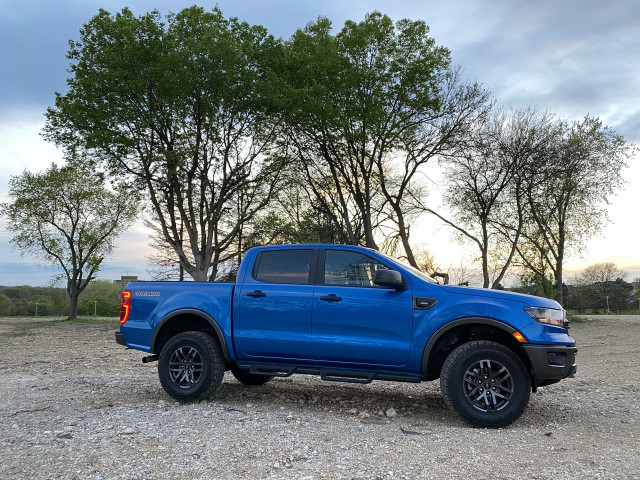 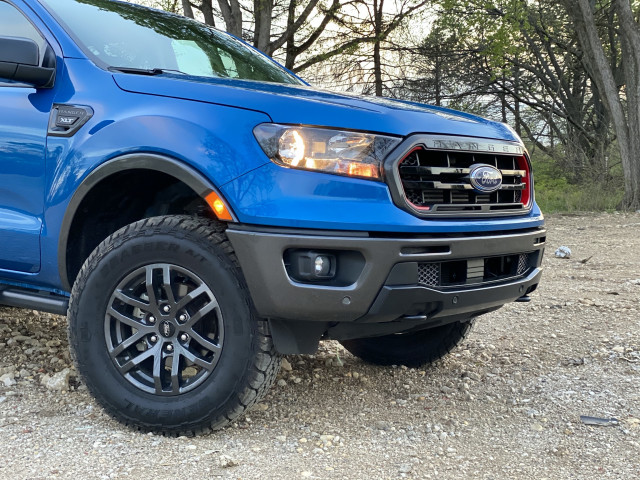 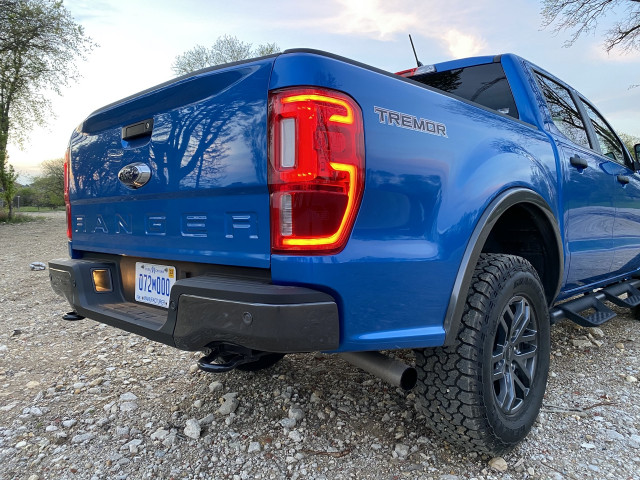 Hit: That one parking lot

I had 30 minutes to burn between commitments and doubled back to an abandoned parking lot. It had a post-apocalyptic vibe, supported by the three gutted buildings in the distance, fenced off as a demolition zone. Yet this mix of dirt and gravel between islands of trees was not cordoned off. I turned off stability control and bounded over ruts, spun out of turns, and got a sense for the Tremor’s capability into the great wide open. It was a glorious 12 minutes. For richer off-road impressions, check out Motor Authority senior editor Kirk Bell’s review.

A redesigned Ranger awaits for 2022, and with it comes a full-bore Ranger Raptor to better compete with the Jeep Gladiator Mojave, Toyota Tacoma TRD Pro, and Chevy Colorado Bison ZR2, which all cost between $46,000 and $50,000.

The Tremor is one of five exterior packages offered on the Ranger, and starts at about $42,000 with destination. It’s a compelling bridge between the FX4 and the forthcoming Raptor with a pricier and more powerful 2.7-liter turbo V-6. Whereas the $1,295 FX4 is available across the lineup, the Tremor package is only available on XLT trim with the 301A package, or the Lariat with 501A package. 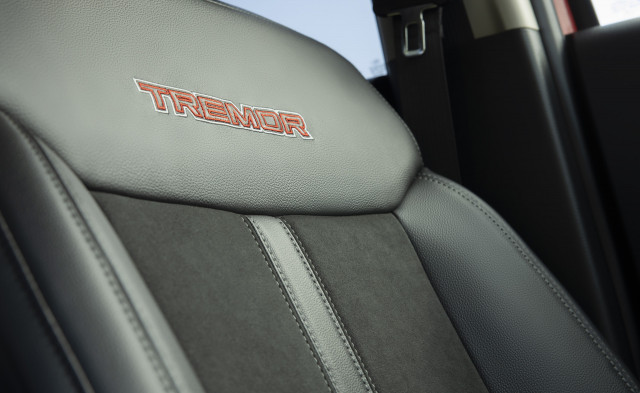 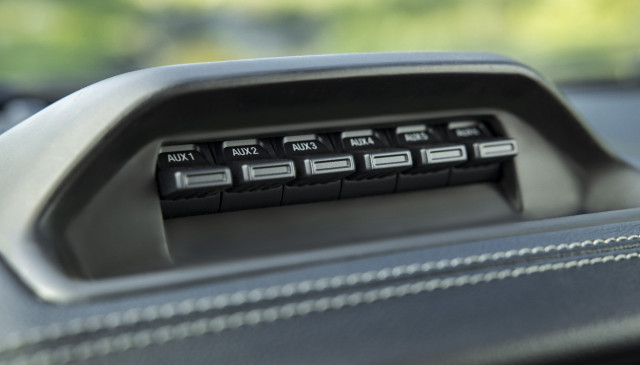 The tester cost $44,430, including destination, and I could’ve trimmed the graphics and a few other conveniences to save $1,500 and miss nothing. It undercuts the competitors while sacrificing only the most extreme off-road conditions, such as hitting the whoops or racing in sand. Starting just under $46,000, the Tacoma TRD Pro is still the benchmark for capability and value, with its Fox internal bypass shocks and standard adaptive cruise control lacking in the Tremor.

The 2021 Ford Ranger Tremor is great if you want more off-road capability but don’t plan on higher-speed extremes. It adds conveniences over the FX4 with an 8.0-inch touchscreen, leather-wrapped steering wheel, vinyl bucket seats with suede inserts, floor liners and six auxiliary switches for aftermarket gear. The cool cosmetic flair and off-road upgrades mentioned above go a long way as morale-boosters.

It’s not the best errand runner, but it’s a great option for when errand running ends and the living begins.