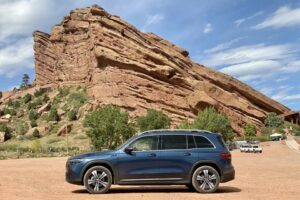 The electric 2022 Mercedes-Benz EQB presents a quieter, cleaner, stronger alternative to the gas-powered GLB 250 small crossover SUV. The electric crossover is the first iteration of a small SUV in Mercedes-Benz’ rapidly evolving EQ electric series. Even within the brand, the EQB could be considered out of date. But, much like my iPhone 11 compared to the iPhone 14 offers I’m currently ignoring, it suited me perfectly fine. For now.

With a price ranging from $56,800 to $61,400, including a $1,050 destination fee, Mercedes situates the new 2022 EQB competitively with most other new electric crossovers, including the Kia EV6, Hyundai Ioniq 5, and Ford Mustang Mach-E. It’s less expensive than a Tesla Model Y and about the same price as a Volvo XC40 Recharge, which is its closest competitor. Like the electric version of the XC40, the EQB shares the same body as the gas GLB small crossover. Except Mercedes flattened the floor to fit its usable 66.5-kwh battery pack, smoothed out the underbody, and solidified the ends for better aerodynamics.

The challenge for Mercedes is convincing the EV curious that the EQB is worth about $10,000 more than a similarly equipped GLB 250.

It is. Easily. In our testing of the five models that currently make up the EQ family, including a preview of the forthcoming EQE SUV, the EQB showed how quickly Mercedes is transforming its entire lineup to electric vehicles and becoming a carbon-neutral brand by 2039. Instead, the GLB also feels out of date in a rapidly changing EV market, like a flip phone to my iPhone, or the Sinclair gas station dinosaur logo. 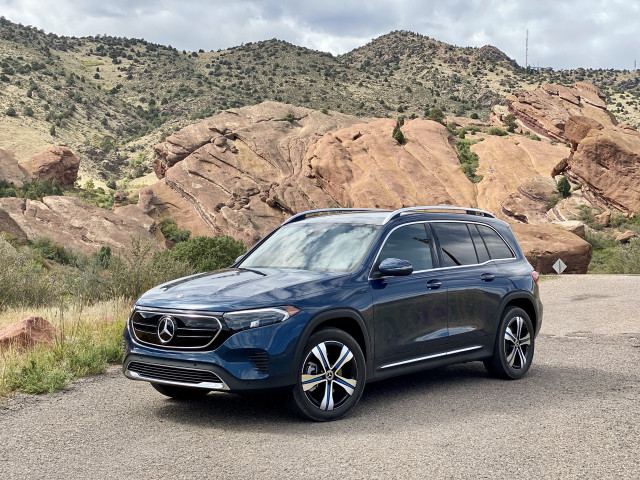 Around Denver and up to the red rocks jutting out of the horizon, the 2022 EQB 300 charmed with its quiet efficiency, impressive grip, and roomy interior. It’s immensely practical, so much so that it can be fitted with a third row to expand from five to seven seats. We’d stick with four passengers, but in a pinch, or on a quick getaway from the city to the foothills, it can fit a couple shorties in the third row.

It’s quick off the line but plateaus just as quickly, lacking the torque-rich thrust of most other electric crossovers with larger motors fed by a larger battery pack. The two motors, including a more potent permanent-magnet motor driving the rear axle, output 225 hp and 288 lb-ft of torque. Mercedes claims a 0-60 mph time of 8.0 seconds, and the larger motors on the EQB 350 make 288 hp and 384 lb-ft, good for a 0-60 mph time of 6.2 seconds.

The standard dual-motor, all-wheel-drive powertrain lets the motors operate independently, so under light throttle it’s just rear-motor power, but a heavier foot activates the front asynchronous motor. There’s enough thrust for most passing moves, even though it weighs about 1,000 lb more than the gas GLB.

That extra weight combines with front struts and a multi-link rear suspension for a surefooted feel, even on curly fry roads up to lookout points and then nose-diving back down to ketchup. It lacks AMG tuning or an air suspension, but with the available adaptive dampers and low center of gravity, the side-to-side motions were limited and it leaned less than other boxy crossovers.

Well-weighted steering and the chunky, flat-bottomed steering wheel led to a solid, full feeling in sharp turns. It exceeded expectations and turned a leisurely scenic drive into a fun jaunt through the hills, the kind that inspires excuses to keep going. Much of the pleasure came from the whisper quiet cabin, which not only benefited from the quietude of electric motors but extra sound insulation squashed road noise. 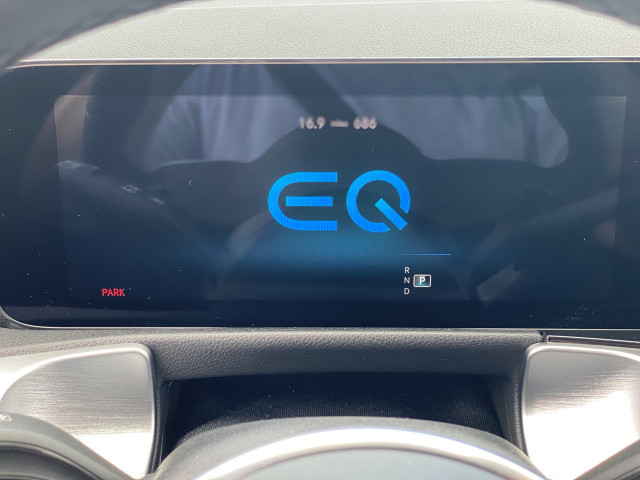 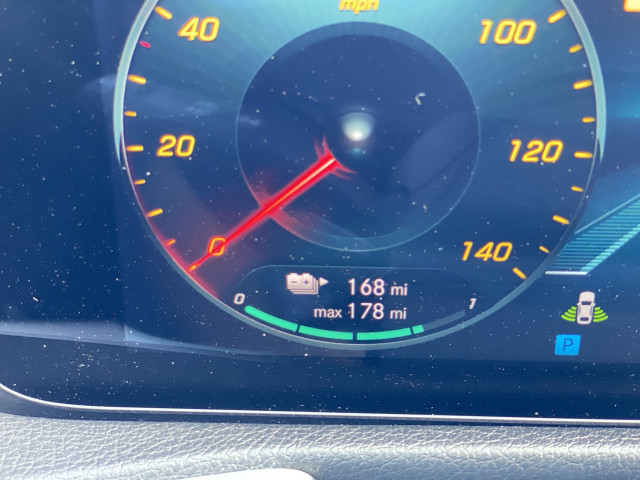 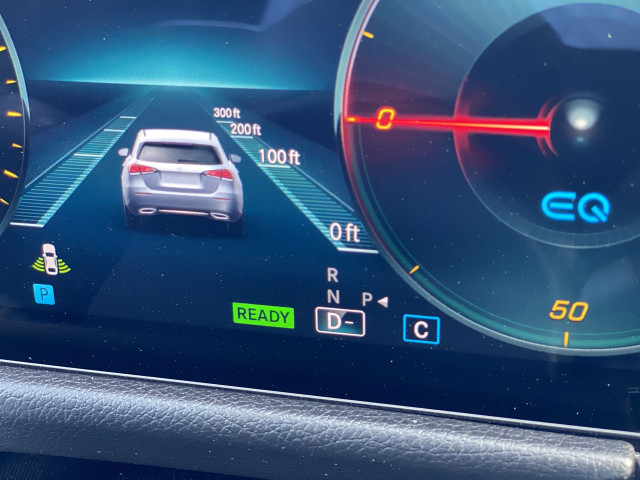 Aside from the slight styling differences and a charge port on the passenger side rear fender, the EQB looks much like the GLB. Rather than Mercedes’ massive Hyperscreen, which encapsulates three digital screens under one pane of glass spanning 56 inches of dash, the EQB employs twin 10.3-inch screens, one for gauges and the other a touchscreen for infotainment.

The EQB’s electric car signals are muted if not hidden, which is a departure from the full monty in larger EQ models riding on Mercedes dedicated EVA2 platform. Steering wheel paddles flick between three regen brake settings shown by a tiny + or – icon in the gear selector display in the cluster. The most significant regen setting, D-, doesn’t quite bring the EQS to a full stop, and D+ mode coasts like a gas engine.

In other EQ models, the regen settings can be felt in the brake pedal and the throttle, which firms up in heavier regen settings. In the EQB, the pedal differences in each setting are less pronounced. And since the EQB shares so much of the GLB, it lacks a frunk but it can be opened, unlike other EQ models.

Other muted signifiers are the range and kwh meters tucked in the lower part of the tachometer. It seems Mercedes understates its EV bona fides. 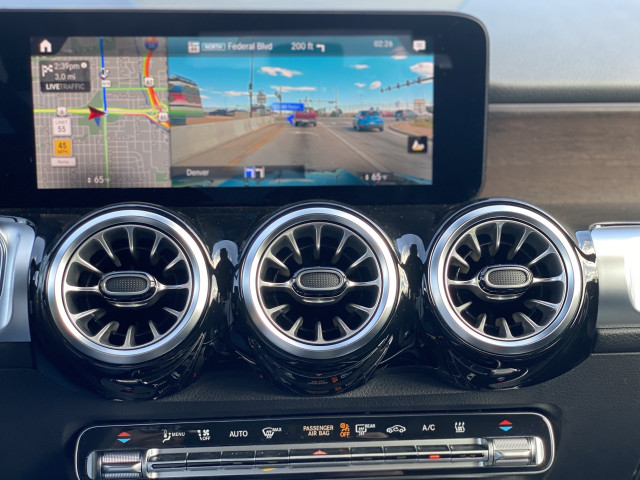 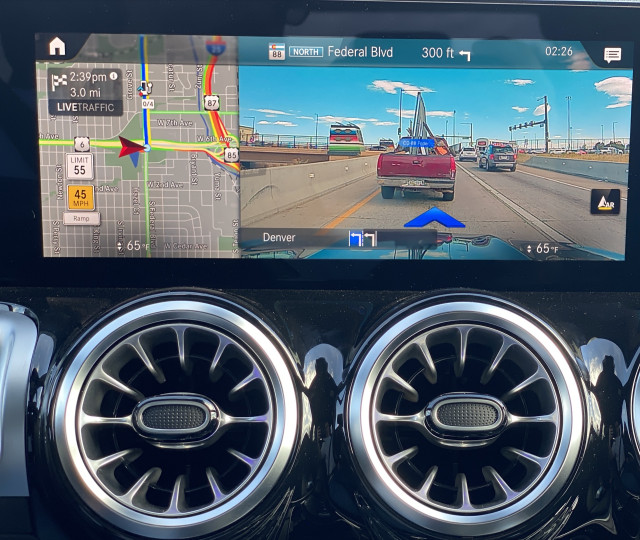 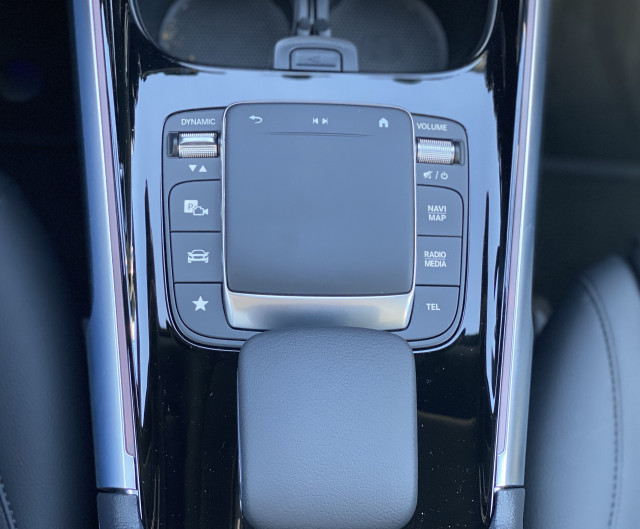 We still don’t know what those bona fides mean in terms of range, exactly. The EPA hasn’t certified the EQB, and Mercedes cites a 260-mile range on the generous European WLTP cycle. That will likely translate to about 225 miles on the EPA cycle, and Mercedes plans a longer-range single-motor front-drive model later.

With its 400-volt electrical architecture, the EQB can DC fast charge at up to 100 kw to recoup about 80 miles of range in 15 minutes, based on our estimates. On a Level 2 240-volt charger rated at 32 amps, it’ll take more than 11 hours for a full charge. This is one way in which the EQB is behind the times (as are the other, larger EQ models); an 800-volt system allows for faster charging. For Mercedes’ next iteration of the EQ series on the EVA3 platform, it will employ a 900-volt architecture.

There are electric crossovers with greater range, including in Mercedes’ own EQ family, yet the EQB eases the transition from combustion to electrification. Included are two years of 30-minute DC fast-charging sessions on Electrify America’s network.

The price difference between the GLB is less pronounced with the EQB’s standard features baked in, such as the twin 10.3-inch screens instead of relatively puny 7.0-inch screens on the GLB 250. Wireless smartphone connectivity and wireless phone charging also come standard, as do heated front seats. An augmented reality navigation system comes standard on the EQB, which overlays arrows and signposts on camera projections of the actual intersections and offramps. A touchpad in the console makes pinching or zooming map views simpler than using the touchscreen.

Also standard on the EQB and extra on the GLB is Mercedes’ 64-color ambient lighting system that illuminates like the Vegas strip. Consumer feedback must be positive, but all the razzle dazzle can be muted, fortunately.

Stepping up from the Exclusive to the Pinnacle trim grades adds more Mercedes finery, such as Burmester surround sound, leather upholstery, a panoramic sunroof, and a surround-view camera system, among other goodies, for $2,550.

In addition to better standard features between the EQB and GLB, the ride quality is better, the power is greater, and the tailpipe emissions are fewer. It’s a better GLB across the board except when it comes to range. For now.

Mercedes-Benz provided airfare and lodging for The Car Connection to produce this firsthand report.