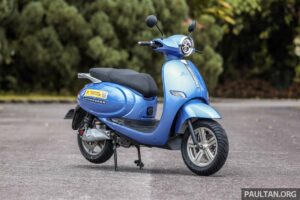 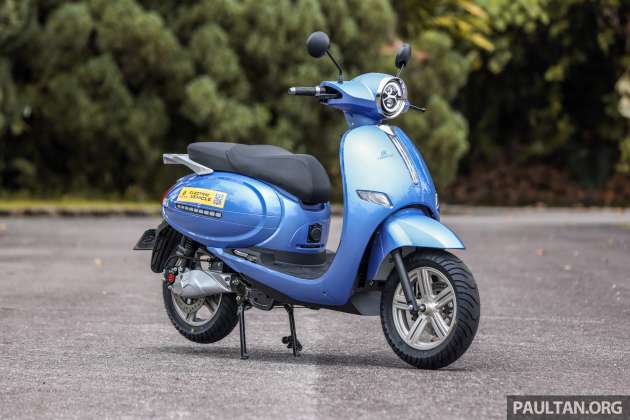 Electric vehicles are coming to Malaysia, you know it, we know it and so does Legatus EV, with the 2022 Legatus Metropolitan electric scooter, priced at RM12,888, on-the-road. Electric scooters are not new to the Malaysian market, of course, with offerings such as the Niu and Eclimo on sale as well as the Treeletrik, directed at the urban mobility and small commercial market.

Many riders have expressed misgivings and negative reactions to electric motorcycles and scooters (e-bikes and e-scooters), citing issues such as weight, range anxiety, lack of charging infrastructure and so on. Indeed, the author, having ridden the Harley-Davidson (H-D) LiveWire in Spain, had such an argument with the head of H-D Europe with the consensus being Malaysia, and most of South-East Asia, simply is not ready for a massive uptake of electric vehicles, especially outside urban centres.

But that was two years ago, pre-pandemic, and this is now, with governments worldwide clamping down on emissions, both exhaust and noise, with the end game being quieter vehicles on the road, both two- and four-wheeled. Unless you want your great-grandchildren living in a desolate wasteland but that’s another story for another time, when we don’t need another hero. 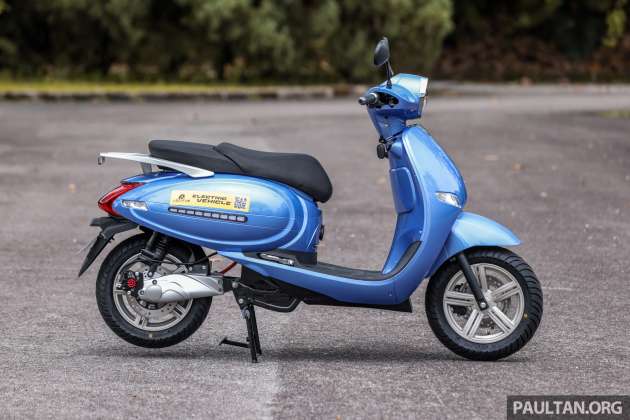 Thus, electric vehicles are upon us, and the reluctance to adopt this “alternative” fuel is real. No, this is not a debate about the pros and cons of electric motors versus the convenience of internal combustion. There are places elsewhere on the internet for that and anyone sending me messages and emails wanting to do so will be forwarded to the rubbish bin.

We are here to look at the Legatus Metropolitan and what it’s like to live with an e-scooter, and what we found along the way. Some things about the Metropolitan as an e-scooter were readily apparent to us, others, will not quite a surprise, still managed to take us by surprise. 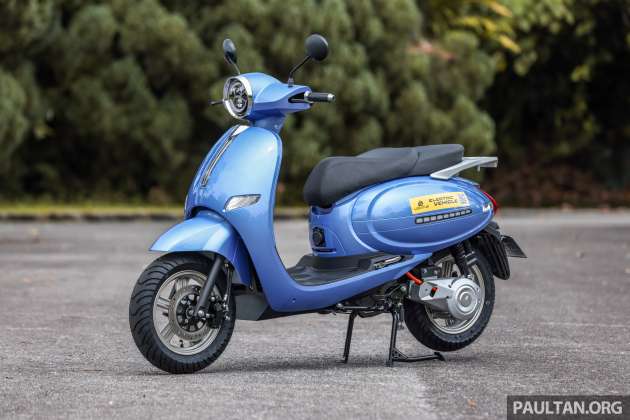 When we were first approached by Legatus to take the Metropolitan out on review, we have to confess to a certain excitement. Our previous experience with electric two-wheelers were previously confined to closed conditions, or in a controlled road setting.

On the first approach, the Metropolitan does look the part of an urban scooter, with retro-esque styling and smooth lines and curves. We can say this with some conviction, the ladies like this scooter, finding it “cute”, “friendly” and “insta-worthy”.

Cuteness aside, the Metropolitan ticks all the boxes for an urban scooter, electric or otherwise. Flat floorboard, small storage space in the cowl. The undersea storage is gone, taken up by the large removable single battery pack, in this case a massive lithium-ion unit.

Legatus informed us development and production is proceeding on twin battery packs for ease of use and off-bike charging, something we could not do with the current single battery. This does mean charging the battery on the Metropolitan in its current form would require both battery and e-scooter to be together, along with convenient access to a domestic plug point.

However, it was pointed out to us the final form of the Metropolitan will change based on market demand and feedback, the unit we were testing being a pre-production prototype from the initial batch of Metropolitans. This ties in with Legatus future plans of implementing a charging network and battery swapping stations, two projects they are in discussions with relevant parties, of which more shall be reporte3d anon as information becomes available.

In the meantime, we have the Metropolitan e-scooter and we lived with it for two weeks. First off, some paultan.org readers pointed out a similar scooter is available for online purchase in China. The question was posed to Legatus and the simple reply was, “you can purchase something that looks like the Metropolitan but what is underneath the bodywork is very different.”

What this means is, simply, Legatus says they have done the research, engineering and development work to create an e-scooter that will perform on the level of a typical 110 cc scooter in Malaysia. This includes work on the battery pack to ensure range requirements are met, redesigned and upgraded wiring as well as the charging system and electronics.

And that’s all that, but what is the Metropolitan like to ride? First off, with the step-through traditional scooter design, the Metropolitan is very definitely gender friendly. The seat height is low enough for shorter riders to get their feet down while there is enough space for taller riders to find a comfortable perch.

Long term ride comfort really is not an issue here, since this e-scooter is designed for around town use and short point-to-point trips, not jaunts on the highway. No doubt some pedantic paultan.org reader is going to pipe up and say, “then what for buy this e-scooter, so expensive, might as well buy Y-suku.” 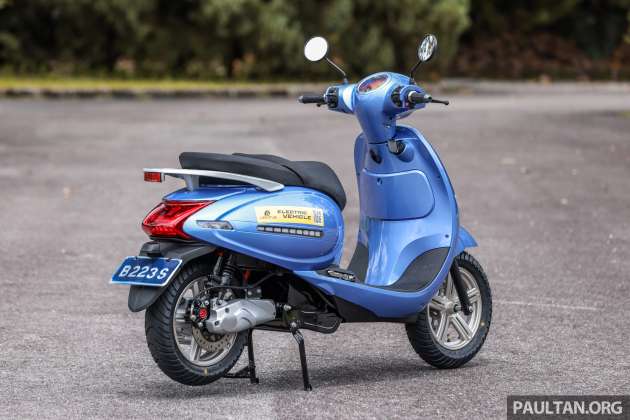 Well, that isn’t the point, is it? Price notwithstanding, the Metropolitan is designed to fit a specific market niche, and to fulfil a specific rider need while complying with upcoming stringent emissions regulations. If you don’t like the answer, you are welcome to seek gratification elsewhere, I heard the border is open now.

Getting on the Metropolitan, starting is keyless, and you are aced with a small LCD screen that displays what you need to know. Two prime readouts that you will pay attention to are the battery charge and estimated range.

There are three power delivery modes, which correspond to the estimated range you will get. Mode 1 is the lowest, which limits you to 50 km/h and slow acceleration off the line, but provides the maximum range of about 145 km. Mode 2 raises the limit to about 75 km/h and we found it suitable for use in town traffic.

Mode 3 allows the Metropolitan to get up to just about 95 km/h and we found this most useful on multi-lane roads in the city. The downside is of course the range, which was found to be about 101 km/h… exactly.

This was discovered in the hardest manner possible, on the LDP, during rush hour, going uphill on the flyover. We were hoping to get to suitable spot where a call could be made for a spare battery to be delivered – Legatus provided two batteries for testing purposes – but alas, this was not the case.

Stranded on the uphill, with traffic whizzing by, was no place to stop and wait for rescue. A decision was made to push the Metropolitan to the nearest safe spot when a kapchai rider stopped and said, “bang, petrol habis ke? Depan ada stesen, mari saya tolak” (brother, out of petrol? There is a station in front, let me give you a push.) 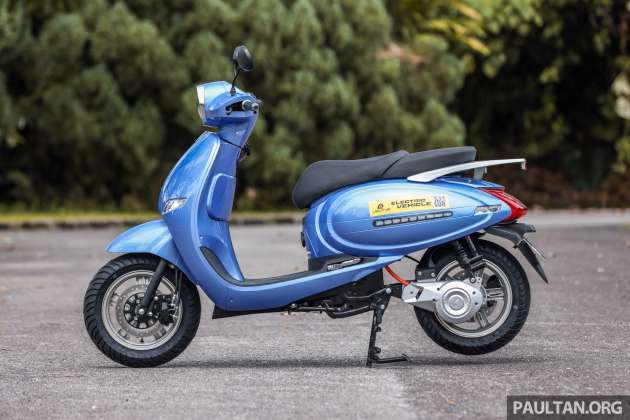 After getting to the station, the rider was going to leave me at the pump and was rather perplexed when I rolled on towards a parking space. He pulled alongside and asked why I didn’t want to fill up and I told him, “this is an electric.” The light dawned and he was immediately full of questions, asking when it would be available and at what price.

Note the lack of crap about running out of juice at an inopportune moment. Because most of us as riders, author included, have run of of petrol, usually at the most inconvenient time. Yes, riders in urban areas take it for granted there is going to be a petrol station no more than a five kilometres away, these days.

A quick battery swap later, and we were on our way. The depleted battery was charged when we had access to a plug point and charging, from just about zero to 100%, took some 3.5 hours. We then tried to replicate the range test and got… 103 km travelled. There you have it, in Mode 3, with a 95 km/h top speed, across varied urban roads and highways, with no gentle handling of the throttle, that is what the Metropolitan will give you. Note, Legatus said tweaking is possible to the charging and battery software to give more range, and this is something for you to consider if you’re thinking of pulling the trigger and purchasing a Metropolitan. Coming back to the actual riding, there is no difference between riding the Legatus and say, the Honda Beat or Yamaha Ego scooters, both of which are meant for urban riding.

Handling and braking is on the basic side of things, with telescopic forks and twin shock absorbers at the back, adjustable for pre-load. Riding the Metropolitan round the curves and corners of city streets, road handling was definitely on the acceptable side of things, with the ability to chuck it into the corner (at sane speeds) an enjoyable thing.

This translated to quick and precise handling in city traffic, letting the short wheelbase do its work slipping through and past gaps in traffic with the brakes, single hydraulic discs front and back, stopping the Metropolitan smartly. However, the price of the Metropolitan is reflected in its suspension, specifically the front forks.

We found the forks to be over damped, resulting in a very choppy ride over the surfaces the Malaysian Public Works Department euphemistically calls roads in the city. This is something Legatus should address, hopefully, or oterhwise you’re going to have to ride below 70 km/h to keep the front end bouncing to a minimum.

In other aspects, we found the Metropolitan to be exactly what it claims to be, a simple scooter designed for short trips in and around the urban environment. The plus side is, you’re doing this in total silence and with minimal impact to the environment. Even better was the ability to hear the traffic around you, and if you car drivers think your car is quiet, maybe you’d better stand at the traffic lights and listen carefully.

So, who needs an e-scooter like the Legatus Metropolitan, priced as it is at RM12,888? Internal combustion engined competition in this scooter size class is indeed competitive, like the Yamaha Ego and Honda Beat, priced at RM5,418 and RM5,765, respectively. 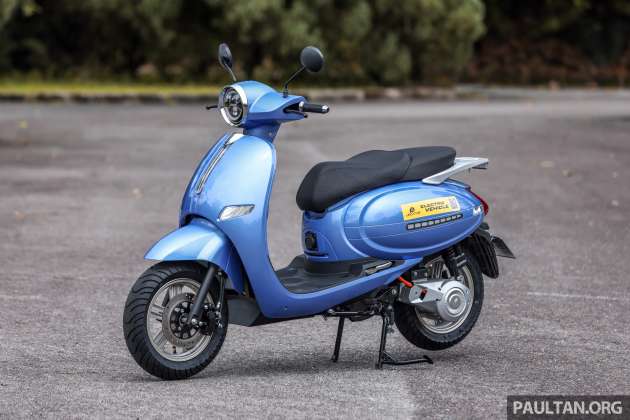 The urban dweller who wants a quick runabout for small errands to the shops, surau and such will like the Metropolitan given the added benefit of its silence. The issue of range and charging will deter some, for which the current market petrol engined offerings are still available.

No doubt there are several negatives to riding an e-scooter, notably for those not living in landed property or with easy access to a plug point when parked. But for the rider who is able to incorporate the idiosyncrasies of living with an e-scooter into his or her lifestyle, the Legatus delivers what it promises.