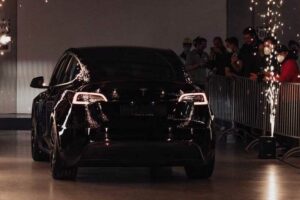 Tesla is consistently ramping up production at the Giga Berlin-Brandenburg plant in Grünheide near Berlin, achieving new milestones.

According to recent reports, based on an email, reportedly sent by Tesla CEO Elon MMuskto employees, the plant produced “almost 1,000 cars last week.”

Such la evel alone would be enough for at least four thousand in June, but we are not sure how many Made-in-Germany (MIG) Tesla Model Ys are possible in Q2 – probably still less than 10,000.

The email includes info about how challenging the current quarter is due to supply chain and production issues in China, and progress at three other plants (Fremont, Austin and Shanghai).

We guess that the Tesla Giga Berlin-Brandenburg plant might be able to reach a production rate of 150,000 units annually later this year, but it would require to at least triple the current level. It would substantially strengthen Tesla in the Europe.

The German site (still under construction) is pretty large, so a long term target is probably much higher, like 500,000 units per year. Additionally, Tesla is expected to produce 4680-type battery cells at the site, instead of importing 2170-type from China (according to previous reports).

Let’s take a look at the latest videos from Germany: