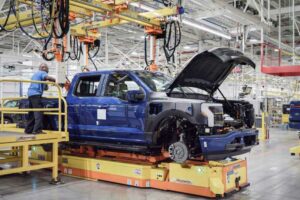 We already know that a new model will be produced at the Blue Oval City plant in Tennessee (currently under construction) in a few years, but there are no details. In the recent InsideEVs podcast (34:44), Miss GoElectric revealed intriguing hints that were shared by Ford CEO Jim Farley in a short chat after the production launch event.

As it turns out, the new electric pickup from Ford is expected to be noticeably different than the Ford F-150 Lightning, which is closely related to the F-150.

According to the video, the new pickup has been under development for quite some time now and will have a more radical, maybe even controversial design. Specifically, there will be “active and deployable aero,” which sounds like new solutions to significantly improve efficiency.

The potential price point and driving range difference between the Ford F-150 Lightning and the new pickup model is briefly estimated at about $7,000 and 100 miles (160 km).

At this point, it’s difficult to say much, but the overall plan of electrification of pickup trucks appears to be divided into stages. The first one was to simply make an electric version of the most popular model (and add a lot of EV-specific features, which makes it even better than ICE). The next stage will be probably a vehicle built from the ground up as an electric vehicle to maximize the potential and apply all of the latest solutions.

Ford knows that the demand for the F-150 Lightning and electric pickup is high. The interest in all-new models like Rivian R1T, GMC Hummer EV Pickup and Tesla Cybertruck (in development) also indicates that more “radical” designs are the way to go.