Replacing Their Tesla Model 3 With A Ford Mustang Mach-E 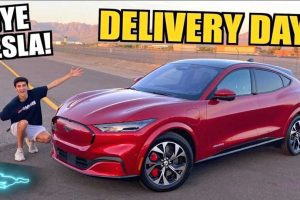 It’s delivery day, and they forgot they’d even ordered the all-electric pony long ago.

You may remember the young guys over at JR Garage. They have a huge YouTube following due to a ton of coverage of their car collection, as well as their prior focus on Tesla’s vehicles. They own a Tesla Model 3, among many other much more expensive cars, but now, they’ve taken delivery of the all-new Ford Mustang Mach-E to replace the Tesla sedan.

Of course, if you know anything about JR Garage’s car collection, you could say the Mach-E could serve as a replacement for any number of cars. However, the guys talk about it being a good choice as a reasonably priced daily driver, which is why they chose it to replace the Model 3. They have a lot of experience with the Model 3 and Model Y, so they’re able to make some helpful comparisons between the Mustang Mach-E and Tesla’s more affordable offerings.

Interestingly, JR Garage says it barely remembers placing a reservation for the all-electric pony over a year ago. They were among the first to place an order for the Mustang Mach-E First Edition. Just a few days ago, Ford reached out to them to let them know that their electric crossover was ready for delivery.

As many OEMs and startups are now following a similar plan – Announce major EV plans and reveal prospective models way head of production and launch – many people may find themselves in the same situation as JR Garage. In fact, we know people who have put a deposit down for the Tesla Cybertruck, Mustang Mach-E, Lucid Air, Rivian R1T, and more.

Sure, most folks aren’t planning to take delivery of four or five new EVs over a short period of time, but the reservations lock them in, and in many cases, the dollar amount to reserve one of these vehicles is cheap and fully refundable.

With that said, banking on most upcoming EVs is really just a waiting game, which is often plagued with delays. This is why automakers are now pushing hard to get their cars to market ahead of the competition. It makes sense that some people may take delivery of whichever vehicle comes to market first. If that’s the case, there’s also a good chance they’ll cancel the remaining pre-orders once their new EV arrives.

Without further ado, enjoy JR Garage’s delivery and initial review of the Ford Mustang Mach-E. We look forward to their upcoming coverage of the all-electric performance crossover. When you’re done watching, leave us a comment. Which upcoming EVs have you reserved? Are you planning to take delivery of whichever car comes to market first?