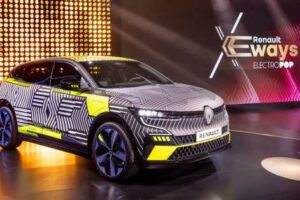 Renault has detailed its electrification strategy with the Renault eWays ElectroPop event, along with a preview of its future electric vehicles. This goes towards the building of a model range that will be comprised of 65% electric and electrified vehicles by 2025 and 90% by 2030, along with plans for battery cell production.

On the product front, Renault announced that it will launch 10 battery-electric vehicles by 2025 at group level, of which seven will be from the Renault brand. One of these will be a reprisal of the Renault 5 nameplate, and this will be built on the company’s CMF-BEV platform for B-segment electric vehicles.

The Renault Group aims to make more affordable battery-electric vehicles thorugh the use of the CMF-BEV platform, which is aimed at reducing vehicle cost by 33% compared to the current-generation Renault Zoe, the company said.

This has been made possible through the modular nature of the battery module, a right-sized powertrain and the carrying over of all non-EV components from the CMF-B platform – which accounts for three million vehicles a year – by 2025. To that end, models built on the CMF-BEV platform will offer “great performance” with up to 400 km of range on the WLTP testing cycle, says the automaker.

Renault also plans to bring back one of its icons, it says, which currently bears the ‘4ever’ moniker, while its thrust into an all-electric C-segment will be spearheaded by the forthcoming MéganE that is set to debut next year. The automaker’s C- and D-segment vehicles will be underpinned by the CMF-EV platform, and in broader Alliance terms, will account for 700,000 units by 2025, it says.

For the Renault brand, this has been previewed by the Megane E-Tech Electric pre-production car, sharing its CMF-EV base with Alliance stablemate, the Nissan Ariya. Models based on this architecture will boast of range up to 580 km on the WLTP cycle, and its capabilities have been achieved by working on attaining reduced friction, weight and state-of-the-art thermal management, says Renault.

The CMF-EV architecture aims to provide greater cabin space through containing all technical elements in the engine bay, this way eliminating powertrain supply cables that cross from the rear of the vehicle to the front, while the engine bay location of heating and air conditioning equipment allows for the thinner dashboard design, it added.

These models will also be joined by a trio of models under the Alpine brand, suggested by what appears to be the roofline silhouettes of a fastback tourer, a hot hatch and a sports car. The sports car is likely to the an EV direct successor to the A110, while the hot hatch wears the straight-lined features of the Renault 5, which in profile view, appears to have bumper-mounted auxiliary lamps.

In terms of batteries, Renault will utilise battery cells of NMC (nickel, manganese and cobalt) chemistry and “a unique cell footprint” for 100% of its future battery-electric vehicle launches across all segments, the automaker said, and this will be comprised of up to one million EVs from all segments across the wider Alliance product line-up by 2030.

The Renault group has also signed a memorandum of understanding to become a shareholder of French start-up Verkor with a stake of 20%, and this partnership is aimed at co-developing a high-performance battery that will serve in C-segment and larger vehicles in the Renault model range, in addition to powering the Alpine models.

This will give rise to a pilot production line in France from next year, for the prototyping of battery cells and modules. Subsequently from 2026, Verkor aims to build the first gigafactory for high-performance batteries in France, starting with a production capacity 10 GWh for the Renault Group and potentially growing to 20 GWh by 2030, according to the automaker.

These efforts will go towards the Renault Group’s aim of reducing battery costs by 60% at pack level, with a target of dipping under US$100 (RM415) per kWh in 2025, then reducing further to under US$80 (RM332) per kWh in 2030, at the same time readying the arrival of the Alliance’s all solid-state battery technology that same year.

The Renault Group claims it is the first OE manufacturer to develop its own electric drive motor without rare-earth permanent magnets, and instead its motors are based on electrically excited synchronous motor (EESM) technology. New technological improvements to the EESM will arrive from 2024, namely for the stator hairpin, glued motor stack, brushless and hollow rotor shafts, which aim to lower costs and improve motor efficiency.

A partnership has also been signed between the Group and French start-up Whylot for the development of an axial flux electric drive motor, says Renault. To be first applied on hybrid powertrains, this aims to reduce costs by 5% while reducing CO2 emissions by up to 2.5 g/km on the WLTP cycle for B- and C-segment vehicles. Renault will also become the first automaker to mass-produce axial flux drive motors from 2025, it says.

For power electronics, a one-box package for the inverter and onboard charger produced in-house will be rated for 800 V charging and involve fewer parts for lower costs, and this will be deployed across hybrid, PHEV and fully electric powertrains for best scale, says Renault. Rounding up, the Renault Group claims it is the first carmaker to act on the entire life of a drive battery. Through its new business unit Mobilize, the group is developing vehicle-to-grid (V2G) solutions for the first life of the vehicle’s battery, which will enable an electric vehicle to feed electricity back into the power grid.

Through this, a car that is connected to the grid for eight hours a day could potentially generate up to 400 euros through V2G, and enable EV drivers to offset part of their annual leasing costs, and for Renault to recapture recurring profits from vehicle fleets, it said.

A battery that has come to the end of their first life in a vehicle may still have two-thirds of its usable capacity, said Renault, and can therefore be deployed for a second life. Mobilize is developing new applications for stationary battery storage, mobile electricity storage or as generators for use in other industries.

Through its industrial setup, Renault aims to lead the European market in battery lifecycle management, including the collection of batteries, refurbishing batteries at competitive prices and the repackaging of upcoming, 250,000 units of leased Zoe EV batteries. The Renault Group has also recycled a cumulative 75 MWh in battery capacity, half of which was achieved in 2020.

The group acquires its EV battery collection and recycling through its subsidiary Indra and partner Veolia, and the group will set up retrofitting, re-using, dismantling and recycling facilities through its Re-Factory project in Flins, France to generate over 1 billion euros in turnover from end-of-life and recycling by 2030.

A recent consortium with Solvay and Veolia will also recover battery materials such as cobalt, nickel and lithium with a very high efficiency and quality, in order to be reused in the production of future, new car batteries, said Renault.