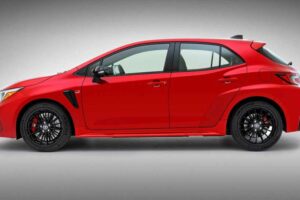 Take a good look at the 2023 Toyota GR Corolla—notice anything different about it? We mean really look at it, beyond the obvious widened fenders, huge grille, domed hood, and triple-outlet exhaust setup. There are features loaded into the GR Corolla that regular Corollas don’t currently have or offer besides the necessary performance upgrades, including an all-new infotainment system, what appears to be a unique steering wheel, and a new version of Toyota’s Safety Sense active safety suite. Toyota surely wouldn’t bother shoving those things into a niche, high-performance, stick-shift-only Corolla if it wasn’t thinking about eventually spreading them to the rest of the Corolla family, and we’ve been told that’s exactly what’s going to happen.

When will these new-to-the-Corolla features make their way from the GR model to lesser Corolla sedans and hatchbacks? Toyota isn’t talking timing yet. However, the automaker confirmed to MotorTrend that the GR’s Toyota Safety Sense 3.0 setup will supersede the current Corolla’s TSS 2.0, and that the Toyota Audio Multimedia 8.0-inch touchscreen will similarly jump down into the Corolla’s “next major model change.” Given how the latest Corolla has been on sale since 2019, it’s due for a mid-cycle refresh any time now—so don’t be surprised if, when the rest of the Corolla lineup switches to the 2023 model year (the 2022s are on sale now), it receives some minor styling and equipment updates along with the TSS 3.0 and new infotainment.

What do these new features bring? Starting with the infotainment setup, which debuted already on the latest Tundra pickup, Toyota says the user experience is fresher and easier to use than on its current system, with “new sight, touch, and voice activation” options. A built-in voice recognition protocol responds to a verbal “Hey Toyota,” followed by a query, while over-the-air update capability via a built-in 4G connectivity can keep the screen’s software up to date and power onboard wifi. It also includes standard wireless Apple CarPlay and Android Auto. Having sampled this system in the new Tundra, we can say it’s a welcome upgrade over the straightforward if slightly dated-looking system the Corolla currently employs.

Toyota Safety Sense 3.0 builds on the 2.0 setup’s capabilities via new hardware. The automated emergency braking system’s pedestrian detection can now recognize motorcyclists and guardrails, while the forward-facing cameras also can see lane markers better, resulting in sharper lane departure alerts and lane-centering functionality. Toyota Safety Sense 2.0 is standard across the Corolla lineup, so we figure that 3.0 will continue that trend on the 2023 or onward models. Ditto the new infotainment setup, which likely will become standard across the Corolla family.

A regular 2022 Corolla’s interior, for comparison.

The only other things we could see making the jump from the GR Corolla to regular models—and no, the 300-hp turbocharged three-cylinder engine and all-wheel drive won’t be doing that—might be the steering wheel and the 12.3-inch digital gauge cluster.

We’re particularly intrigued by the steering wheel, which is a seemingly new-to-Toyota piece. The round hub, spokes, and buttons on it aren’t found on any other current Toyota, let alone other Corollas. It’s an upscale-looking piece, and not so overtly sporty as to be a one-off for the GR Corolla’s performance mission; strip away the “GR” logo on the lower part of the wheel, and this could and should make its way to other Corollas.

The button layout is clearer and more premium looking than on today’s Corolla, with a pair of toggle switches surrounded by relevant controls. On the left are directional buttons for navigating the gauge cluster display flanked by a “back” button, phone, voice assistant, and volume controls. On the right are cruise control and lane centering controls, which live above skip track and audio mode buttons. Other Corollas have odd circle-shaped binnacles for these same controls mixed with flat, similarly sized buttons for secondary inputs. Toyota didn’t say whether this wheel was among those items debuting on the GR Corolla to escape to other Corollas soon, but we hope it’s on the list.