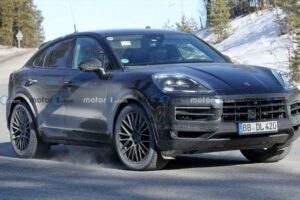 A new batch of spy shots gives us a fantastic look at the refreshed Porsche Cayenne Coupe. There’s still some camouflage on the body, but it’s pretty light.

In front, there’s a panel covering the fascia, but the various openings are still visible. The changes appear to be minor. The inlets in the corners seem to be a bit bigger. 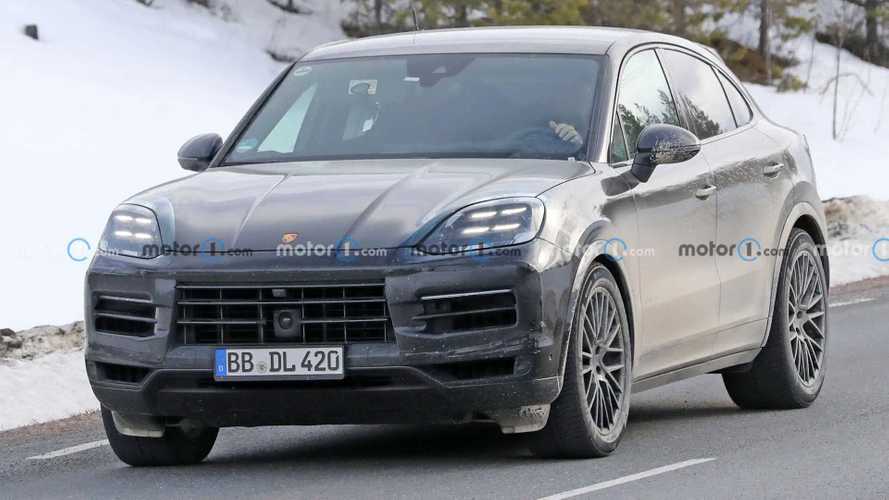 You can also see the tweaked headlights that have a pointier shape for their inner edges. The engineers put decals around the lamps to disguise their size. The hood receives revises sculpting to make the new headlights fit.

At the back, there is covering over the full-width taillights. They appear to be a bit thinner than the current lamps.

Previously, we saw spy shots of the updated Cayenne Coupe Turbo GT. It had a pair of oval-shaped outlets coming out near the center of the tail. The front end has a different fascia than the standard model by lacking the little inlets in the lower corners of the fascia.

Other spy shots provide a look inside the regular Cayenne. There appears to be a new infotainment screen. The revised center console includes a small screen. The crossover adopts the stumpy gearshift from the latest version of the 911.

There’s no info yet about the updated Cayenne’s powertrain range. We aren’t expecting any significant changes. Judging by other Porsche refreshes, some models might make a little more power than the pre-refresh version.

Similar updates are coming to the standard Cayenne. We expect the refreshed vehicles to arrive for the 2023 model year.

A recent report suggests the next-gen Cayenne and Panamera would share a heavily revised PHEV powertrain. By 2025, Porsche wants half of its sales to be plug-in hybrids and EVs. Fully electric vehicles would be more than 80 percent of the automaker’s output in 2030.

A fully electric Macan joins the Porsche lineup for the 2024 model year. It rides on the PPE platform that supports up to 350-kilowatt charging. Expect dual- and single-motor configurations to be available. The battery would have a gross capacity of around 100 kilowatt-hours.