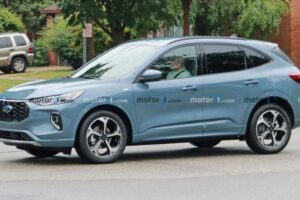 At first glance, the revamped Ford Escape in these new spy shots doesn’t look different from the example spotted last month. However, a close inspection reveals that this Escape is wearing a new ST-Line badge on its front fenders.

Ford doesn’t currently offer the Escape in the ST-Line trim in the US, but it does offer it on the Edge and Explorer. The ST-Line on those models adds various visual upgrades from their hotter ST variants without the potent powertrains or higher price tags. The Escape also lacks a proper ST model, and we haven’t heard about plans to build one from Ford. However, in 2020, Ford’s James Hughes called the idea of an Escape ST a “fantastic” one.

The appearance of an Escape ST-Line could indicate that Ford is planning a proper Escape ST. The mid-cycle redesign would be a golden opportunity to revamp the model’s lineup and introduce a new trim or two. However, Ford hasn’t confirmed anything. One photo shows off the interior, and it doesn’t look like Ford is making any big changes there.

If Ford follows the formula of its other ST-Line variants with the new Escape, we would expect this to be a visual upgrade without any significant powertrain changes. The restyled Escape should continue offering two EcoBoost engine choices, a hybrid, and a plug-in hybrid. A proper Escape ST could get something spicier under the hood. Ford offers the Escape ST-Line in Australia in front-wheel-drive, all-wheel-drive, and PHEV variants.

The Escape ST-Line is just as naked as it was in the previous spy shots, without a speck of camouflage to be found anywhere on the crossover. The new Escape will receive a brand-new face with a redesigned grille, hood, bumper, fog lights, and headlights. The front also features a light bar connecting the headlights. The rear-end will receive new taillights. Non-ST-Line models could receive different front-end styling.

We don’t know when Ford will launch the new Escape and the fancier Escape ST-Line, but we expect the automaker to host an official debut before the end of September. Rumors suggest Ford will begin Escape production in November. The addition of an ST-Line would help Ford further differentiate it from the Bronco Sport, with the Escape taking a more upscale aesthetic with the ST-Line.