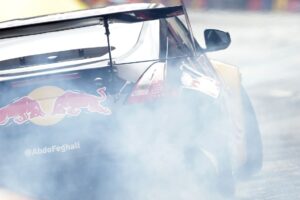 Red Bull, maker of the energy drink that gives you wings, pulls off some amazingly creative events and promotions, ostentatiously flaunting its sponsored off-road trucks and screaming race and drift cars piloted by extremely skilled professional drivers. Red Bull also does what Red Bull does best—cause a ruckus in some of the world’s most desirable-but-forbidden go-fast locations for the sake of entertainment and because it can. Red Bull parades its status and pocketbook to get proper permission for access to whatever locations it wants, right? Not always, as it turns out. A recent stunt in Sophia Square in Kyiv, the capital city of Ukraine, apparently has social media in an outrage and officials accusing Red Bull of illegal drifting.

Just another fun-filled time for the folks at Red Bull, right? Not really. Kyiv officials were not so impressed by Red Bull’s “intolerable act of vandalism,” which it alleged was done without an approved permit. Since the Sophia Square area was near a protected United Nations Educational, Scientific and Cultural Organization (UNESCO) historical monument, it would have needed separate approval.

In addition to the destruction, opponents were concerned that the stunt had posed a safety risk since Red Bull had not secured any barriers around the area.

Those involved in the video shoot were surprised to see outrage surface after the drifters had left Sophia Square, with police allegedly arriving at the site where the racers and cars had gone after the morning’s shoot. Word has it that those involved weren’t allowed to leave the site for a little while, and the cars were apprehended by tow trucks.

There are two sides to every story, of course, but it seems Red Bull’s going to have to use its angelic wings (in addition to its touching Instagram apology) to get out of this mess.