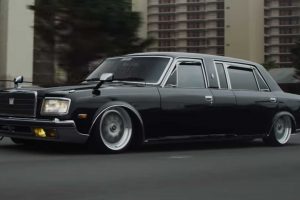 This Mafia-approved Century is one of the coolest sedans we’ve ever seen.

Our passion for the Toyota Century runs deep as we find it among the most interesting sedans the automotive industry has given us. It’s been around since the 1960s and yet only car enthusiasts have heard about it. Why is that so? Because the stately sedan has always been a Japan-only affair, and even there it’s quite rare. Only a handful of high-ranked executives have one, along with members of the Imperial House of Japan and some of the local authorities.

While the second-generation model is better known around the world thanks to its V12 engine, the first Century is also quite captivating. The one featured here is a rare extended-wheelbase offered towards the end of the first-gen’s model lifecycle, specifically between 1990 and up until 1997 when the replacement was introduced.

Codenamed VG45, the last hurrah of the original Century measured 5270 millimeters (207.5 inches) in its EWB guise and had a generous wheelbase of 3010 mm (118.5 in). This particular car belongs to YouTuber John Ludwick and he made a few changes, including a custom exhaust and an air suspension to bring the sedan closer to the road.

Looking downright sinister, the stretched Century is ready to star in the next mafia movie. Meanwhile, the folks over at Halcyon shot the mobbed-up sedan on the streets of Ocean City where the car looked as if it was gliding over the road on its aftermarket wheels. The video is mostly about the exterior, but there are a few scenes with the inside, including at the 3:14 mark where you can see the car’s built-in electric shaver.

It might not be as luxurious and refined as a new Mercedes S-Class or BMW 7 Series, but there’s something special about the Century no other car can quite match. If only the third-gen model would’ve kept the fender-mounted mirrors…