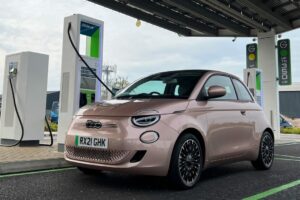 The cost of rapid charging an electric vehicle (EV) in public has risen by 21 per cent since September, with the average price now standing at 44.55p per kWh. That equates to an increase of 7.81p per kWh since last summer, meaning it now costs around £22.81 to charge the 64kWh battery of a typical EV to the recommended 80 per cent at a public charger – a rise of more than £4.

To put that figure into perspective, over the same period of time the cost of an 80 per cent fill for an average family car with a 55-litre tank has risen by £14.54, meaning petrol car drivers today have to fork out £74.21.

Analysis by the RAC shows that on average it now costs 10p per mile to run an EV kept topped up by public rapid charging, an increase of 2p per mile from last summer. So in spite of rising electricity prices, EV drivers are still onto a winner when it comes to energy costs – a comparable petrol car now costs 19p per mile to fill up, while diesel fuel costs are even higher at 21p per mile.

The RAC has long tracked average fuel prices across the UK, but has now committed also to tracking the prices of public rapid charging, reflecting the increasing take-up of EVs by new car buyers.

Simon Williams, the RAC’s spokesman for EVs said: “Just as the price that drivers of petrol and diesel cars pay to fill up at the pumps is driven by fluctuations in the world oil price, those in electric cars are affected by gas and electricity prices. But while electric car drivers may not be immune from the rocketing price of wholesale energy – most notably gas, which in turn dictates the cost of electricity – there’s no doubting that charging an EV still represents excellent value for money compared to filling up a petrol or diesel car.

“Unsurprisingly, our analysis shows that the quickest places to charge are also the most expensive with ultra-rapid chargers costing on average 14 per cent more to use than rapid chargers. For drivers in a hurry though, or travelling a long distance, paying this premium might well be worth it with the very fastest chargers capable of almost completely replenishing an electric car’s battery in a matter of minutes.”