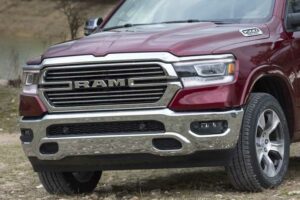 Looking to save a few bucks on a brand new Ram 1500 truck? Probably not, but if literally every penny counts, Ram has added a new package for its Laramie trim trucks that swaps the front LED headlights for some sweet lower-trim halogens. Ram calls it the Front Lighting Value Package, but in non-fancy speech, that’s an optional headlight downgrade to the base units. Whoa. Sign. Us. Up. It’s hard not to feel offended, right? Luckily this is just optional.

As reported by Mopar Insider, the Ram configurator indeed lists the Front Lighting Value Package that “adds” halogen quad headlamps and front fog lamps; ditching the LED headlights and fog lamps saves customers $495, so there’s that at least. The Premium Lighting Group full LED upgrade (fog lamps, headlamps, and taillamps) on the Big Horn trim costs $995, indicating Ram values the LED headlights and fog lights at $495 and the taillamps at $500. Is the Front Lighting Value Package really refunding the full value of the swapped-out LED headlights and fog lamps? Close enough to not suspect foul play. Remember, you get to keep the LED taillights.

Why. Why would Ram subtly and weirdly extend its offering of base headlights to the Laramie trim? It probably comes down to the whole semiconductor chip shortage ordeal. Ram is having a problem supplying LED headlights, and that’s just the way it is.

Interestingly, it’s not just Ram having issue with LED lighting. A commenter pointed out that you can save $500 by opting for halogen headlamps and fog lamps on the Ford F-150 Lariat trim. Rather than having a fancy name for the downgrade, Ford just lists the halogen headlamps and halogen fog lights as Exterior Options in the configurator.

And has anyone taken Ram or Ford’s offer, sacrificing headlight prowess for a couple hundred buckaroos? As noted in the Mopar Insider piece, 5thGenRams forum members have apparently spotted some of these feral unicorn Laramie Rams on dealership lots, indicating Ram is building and sending out Laramies with the Front Lighting Value Package.

We appreciate that Ram and Ford both updated their configurators to include the slight expansion of halogen headlamp availability. Do you see a problem, or is this totally okay?