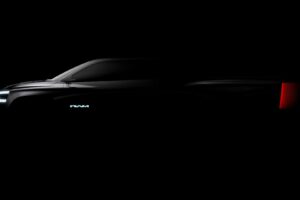 Ram is a little late to the electric truck segment but the brand will finally have its competitor for the Ford F-150 Lightning and Chevrolet Silverado EV next year. Before the production model hits the US market late next year (or in early 2024), Ram will show a near-production concept previewing the final product. It will be unveiled during the 2023 CES in January next year.

The automaker has released an official press release confirming the debut of the concept is scheduled for January 5 during the Consumer Electronics Show. Until recently, it was believed the Ram 1500 Revolution concept will arrive this month at the LA Auto Show but it turns out that either the earlier information was incorrect or the manufacturer has changed its plans.

Without going into specific details, Ram says the electric truck will be “loaded with exclusive advanced technology features” in an attempt to “once again redefine the pickup truck segment.” Ram’s first production electric vehicle is part of its Stellantis parent company’s larger Dare Forward 2030 strategy, which puts a focus on electrification among all its global brands.

From what we know so far, the zero-emissions truck will ride on the STLA Fram platform that Stellantis is currently working on. It’s a scalable architecture that, depending on the battery specifications, can provide a maximum range of up to 500 miles (805 kilometers) per single charge. In its largest version, that platform can accommodate 200-kilowatt-hour batteries, though we don’t know how big the battery pack of the production truck from Ram will be.

There’s a new teaser image accompanying the press release from Ram and it shows the electric truck from the side for the first time. The sketch doesn’t reveal much of the EV truck, but at least we can see its muscular side profile and the shape of the LED daytime running lights at the front.

Ram wants to have an electrified product in the majority of segments it is currently competing by the middle of the decade. The automaker promises to “push past the competition as leaders in a combination of areas truck customers care about the most: range, towing, payload and charge time.”