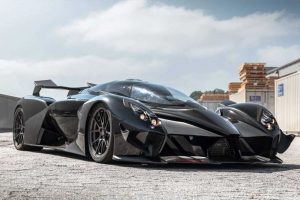 As the current Series in Forza Horizon 4 comes to an end another one is just around the corner, and Playground Games has confirmed a rather unusual machine will be coming to the game soon: the Raesr Tachyon Speed.

You might not be familiar with the Tachyon Speed, or indeed Raesr, as it’s hardly a common sight — and even less so on the UK’s roads, where FH4 is set. Raesr is actually an acronym, for Rice Advanced Engineering Systems and Research, and pronounced “racer”, in case you were wondering. The Tachyon Speed is the brand’s debut car, albeit a prototype, and just happens to have 1,250hp.

It’s part of the modern breed of electric hypercars, only rather than one, two, or even four motors, Raesr actually stacks six direct drive motors together to produce its punch — and there’s over 3,600lbft of torque too — which goes to all four wheels independently. As it’s a prototype, Raesr hasn’t said what the battery capacity is, but given its charging requirements it looks to be a relatively common 55kWh unit.

Raesr is also planning a production model, with the motors wound up to some 1,800hp. The asking price for a single example starts at $750,000, but as Raesr describes itself as a “boutique”, there’s plenty of room to spend more.

Come help us celebrate the launch of Forza Horizon 4 on Steam! Plus check out what's new this month in the latest Forza Monthly, this Monday at https://t.co/rXLuDb5sWb. pic.twitter.com/KqdX686nZ4

Confirmation of the car’s presence comes by way of the usual stream teaser image. With an update due next week to get the Series 33 action going, there’ll be a live stream from the Forza Monthly team to reveal all. These streams usually feature a close-cropped detail of a relevant vehicle to the update and this month’s is, pretty clearly, the distinctive rear end of the Tachyon Speed.

In fact we had a clue earlier in the week that the Raesr would be coming to FH4. “Torben Tuesday” made a reappearance this month with clues to cars coming in the next update, and the clue for Series 33 is a relatively simple code:

The Forza Monthly stream which will confirm everything is scheduled for 1900 UTC on Monday March 8, so please act surprised when you tune in!