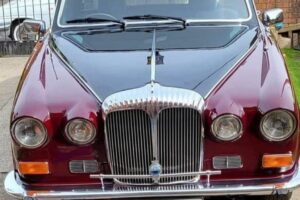 The stunning car will now go on display after a couple’s investigations revealed its royal origins. Trevor Lee paid just £2,000 for the DS420, including a discount he asked for when he feared a lack of service history would stop him getting his money back if he sold it.

Mr Lee and his late wife Cheryl found there was also no record of the car ever having been taxed.

That led to Mrs Lee trying to uncover the car’s provenance until Jaguar “reluctantly confirmed” its distinguished former owner.

Now Mr Lee has had several sizeable offers from people interested in buying the car.

However he says he has no wish to profit from it and that an auction for the vehicle this year will be “all for Cheryl”.

The Daimler will first go on display in Blackwood, Wales with all proceeds going to one of Mrs Lee’s favourite charities, the RSPCA.

Up until that point, it had spent more than a decade sitting in a garage.

However, on closer inspection Mr and Mrs Lee noticed the car was longer than a normal Daimler and, despite having done almost 45,000 miles, there was no record of its tax disc.

Mr Lee said it “had all the hallmarks of a royal car,” and that his wife “couldn’t let it go”.

After three weeks of phone calls, he said Jaguar finally confirmed that the car was produced for the Queen Mother in 1986, with the intention of it returning to their museum upon her death.

Jaguar told the couple the car was with the Queen Mother until 1991, after which the royal colours, black and burgundy, were removed for plain black.

It was then given to the mayor of the London Borough of Richmond upon Thames.

After the confirmation of its history, Mr Lee said his friend offered him £17,000 to buy it back.

“He wasn’t best pleased when I said no,” he added.

Cheryl Lee died from cancer in 2016, after which Trevor said he lost all motivation to fix up the car.

“We would see each other all day every day so it was really very hard [when she died].

He said his daughter “pushed” him to keep the promise that he would finish it and he had to get special permission to change the exterior back to the ceremonial colours and embroideries, ready for auction.

Mr Lee said some of what the car fetches at auction in Yorkshire will go to Cancer Research UK in honour of his wife. A similar car made £125,000, 25 years ago.

The rest of the money, he said, will help out his family and he would like to go on holiday.

“I don’t know what this one is going to make. I have not got a clue,” he said.

“A weekend in Yorkshire is enough for me.”

Mr Lee said that without Cheryl “none of this would have been possible”.

So when the car goes on display, he has insisted a picture of her sits on the bonnet – so that everyone knows.