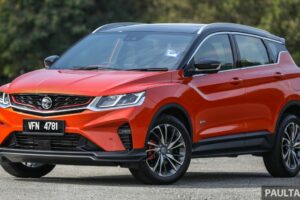 With 4,473 units delivered in June 2022, the Proton X50 remains the market leader for B-segment SUVs as well as the overall leader for the SUV market in Malaysia. The latest sales figure for the X50 is nearly 61% higher than the 2,779 units sold in May and is part of an overall total of 14,787 deliveries (domestic and export) accomplished last month.

According to Proton, June was the best sales month for the X50 since the model’s launch way back in October 2020. The SUV is currently available in four variants, namely the 1.5T Standard, 1.5T Executive, 1.5T Premium and 1.5 TGDi Flagship. Since its launch, the X50 has proven to be a very popular model among car buyers, with over 100,000 bookings made as of March this year.

It was revealed last month that the waiting time for the SUV is about six months and Proton is working hard to ensure customers receive their cars before April 1, 2023. This is after the government said the sales and service tax (SST) exemption won’t be extended, but an allowance for the SST exemption will be applied for any vehicle booked before July 1 this year and registered by March 31, 2023.

On exports, the carmaker said 100 units of the X50 were shipped in June, “with more to come for the remainder of the year.” On the last day of May this year, the company announced that it had exported the first batch of X50, X70 and Saga cars to South Africa, its first since 2012.