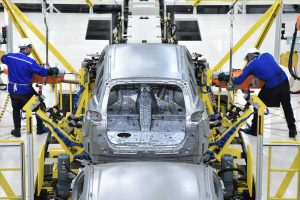 Proton has announced that production in Pakistan will begin later this year. The automaker said that Al-Haj Automotive, its partner in the country, is set to commence local assembly operations at its new plant in Karachi by the third quarter of 2021.

Planned capacity will be 25,000 units per year at the facility, which is being built on a greenfield site. In 2019, the company had announced plans for the plant, which was originally supposed to have commenced operations before the end of 2020, with an initial investment of USD30 million (about RM121.9 million).

The plant is expected to create around 2,000 direct employment opportunities within the first three years of operations, with a further 20,000 indirect jobs coming as a result of the formation. Under the agreement inked in 2019, initial sales of Proton vehicles in the country would be through CBU units from Malaysia before local production takes over. The company introduced the Proton X70 in Pakistan as a CBU model last December, and the SUV is due to be locally-assembled once the facility gets underway. Following its official debut, the wait list for a vehicle was reportedly up to nine months, so it would seem CKD can’t come soon enough.

The automaker has been ramping up activity in Pakistan. Earlier this month, it launched the Saga there, with five variants – including the limited-edition Saga R3 – going on sale in that market. The Saga sedan for Pakistan is powered by a S4PE engine with a displacement of 1,299 cc, which is 33 cc less than the Malaysian model (1,332 cc). The lower engine displacement of below 1.3 litres allows the Saga to be priced more competitively in Pakistan, thanks to the tax breaks it qualifies for with this classification.