Production VW ID.Buzz Electric Bus May Start At Under $50,000 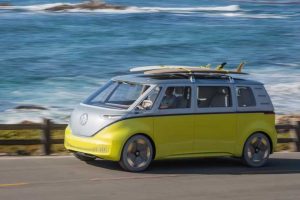 This estimation is based on an analysis that states in Europe it will cost from between €40,000 to €60,000, depending on version.

Considering how much of a cult classic the iconic VW bus has become over the many decades it’s been with us, it’s no wonder people are excited for the revived, reinterpreted and fully electric model. It will be loosely based on the design of the ID.Buzz concept, it will be underpinned by the group’s MEB platform and it could arrive sometime around the year 2023.

However, there’s still one big unknown that could make or break this model: its price. Electrek is now pointing a report by Edison, Germany’s largest electric utilities and providers of industrial and commercial energy services, which states the production VW ID.Buzz will be priced somewhere between €40,000 and €60,000 depending on version.

Edison states (translated by Electrek) that

The battery formats differ from ID.3 and ID.4. According to the current state of affairs, the inexpensive entry-level version has a battery with around 60 kWh, which should be good for a good 300 kilometers range (according to the WLTP standard). According to VW findings, an ideal value for short-haul traffic in larger cities. The large battery, on the other hand, is planned with around 100 kWh – the more than 500 kilometers range should make the bus fully suitable for travel.

This leads us to believe that the base model with the smallest battery will cost close to €40,000, while the version with the 100 kWh battery will be closer to the €60,000 mark. The assessment could obviously be wrong, but based solely on information from the source article, this seems like a reasonable conclusion to draw.

Volkswagen has been quite tight-lipped about the ID.Buzz, although it’s clearly still working on it, as the spy shots in the articles linked below clearly show. We’ve not yet seen the production body, though, as all our spies have caught so far are just test mules.