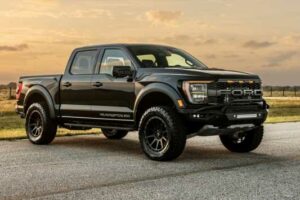 It’s not the first time Hennessey has turned its attention to enhancing the performance of a Ford off-roader, because the firm unveiled its 405bhp Ford Bronco VelociRaptor 400 last year.

This new F150-based truck uses the same 3.5-litre turbocharged V6 as the standard Raptor but with a host of upgrades. This includes enhanced air induction, a high-capacity intercooler with blow off valve and an upgraded engine-management system. Hennessey claims the new VelociRaptor 600 will cover the 0-60mph sprint in 4.2 seconds and complete the quarter mile in 12.9 seconds.

Changes aren’t just limited to the engine, because for an extra $17,950 (on top of the $19,950 price of the engine tweaks) Hennessey will add ‘Off road stage 1 upgrades’, comprising 37-inch off-road tyres, a suspension-levelling kit, 20-inch wheels, VelociRaptor bumpers front and rear, and six-piston Brembo front brakes.

With all of the upgrades available (along with the purchase price of a stock Ford F-150 Raptor), you can expect to pay around $102,045 for a VelociRaptor 600. But exclusivity should be assured, with only 250 units to be produced in 2022. Hennessey’s performance upgrades will also be covered under a three-year/36,000-mile warranty.

Check out our list of the best pick-up trucks here…