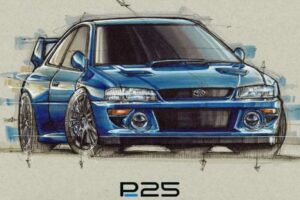 The Prodrive P25 celebrates the brand’s successful relationship with Subaru in the 1990s by creating a road-legal model with inspiration from the 1997 Impreza World Rally Car and 22B. That year, Subie won the WRC’s manufacturers’ championship and its driver Colin McRae was second in the drivers’ standings.

The P25 uses a 2.5-liter turbocharged flat-four engine making over 400 horsepower (298 kilowatts). The power runs through a six-speed, semi-automatic gearbox with paddle shifters behind the steering wheel. Prodrive says the model makes extensive use of carbon fiber to keep the weight down.

The teaser sketch depicts an Impreza with a mix of influences. The big, low-mounted fog lights are from the 22B. The aerodynamic side mirrors are similar to the ones on the rally car. Based on the drawing, the front fender flares are more aggressive than either original model. It rides on multi-spoke Prodrive-branded wheels, rather than the original bronze-colored look.

There’s no indication of what the interior of the P25 looks like yet.

Prodrive’s announcement mentions the P25 having a “lightweight chassis.” It’s not clear whether the company is taking original Imprezas and modifying them or building the whole vehicle from scratch.

Some of the folks who worked on the ’97 rally car contributed to the P25. Peter Stevens, who penned the original, “defined the design” of the new model, according to Prodrive. David Lapworth, the firm’s technical director, worked on the engineering for both of them.

“The original 22B Impreza is considered the most iconic of Subarus and highly sought after. We wanted to enhance everything that made that car so special by applying the very latest technology to create our own modern interpretation of a car that’s established a place in motoring history,” said Prodrive chairman David Richards.

Prodrive will build just 25 examples of the P25. The model will make its physical debut at the Goodwood Festival of Speed in June. The company is accepting expressions of interest for the model now and plans to deliver the first one before the end of the year. There are no pricing details available at this time.