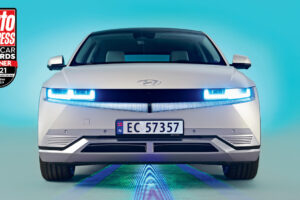 The Hyundai Ioniq 5 is the 2021 Auto Express Premium Electric Car of the Year, with the Audi Q4 e-tron and Tesla Model 3 commended

With the Ioniq 5, Hyundai has stepped up a level from its already highly-rated Kona Electric. Here, the Korean brand has aimed for the premium territory, and it’s nailed the brief at its first attempt.

The new E-GMP underpinnings are designed for pure electric cars from the outset, and the Ioniq 5 feels sophisticated in a way that no Hyundai has felt before.

The driving experience offers the usual EV traits – it’s smooth and has precise throttle response, it’s near-silent and is free of the buzzes and vibrations that are endemic of any combustion engine. Paddles behind the wheel allow the driver to adjust the level of brake regeneration on the move, making the whole experience intuitive and therefore very low-stress. It’s comfortable, too, and long-distance refinement is great.

Indeed, relaxation is a recurring theme with the Ioniq 5. The open-plan cabin offers soft, squishy front seats that can recline electrically to a near-horizontal level – perfect for when you want to catch a quick nap while you’re recharging.

Not that you’ll have very long to wait. Thanks to its 800-volt electrical system, the Ioniq 5 can recharge at a rate that even some premium rivals can’t match. The challenge in the short term will be finding a charging point that can take advantage of it.

Performance and range are truly premium, too. Four-wheel-drive versions get two electric motors for a combined 301bhp, while overall range is between 238 and 298 miles, depending on spec.

The one thing that isn’t very premium is the Ioniq 5’s price, which starts from £36,995 and rises to £48,145. While some might think that’s a lot for a Hyundai, the brand should be viewed as a true premium player. Based on what we’ve seen here, that’s completely justified.

While a more modest trim makes sense for a company car buyer (see Page 46), the most premium feel comes at the top of the range. The top-spec Ultimate paired with a 301bhp twin-motor set-up and 73kWh battery is that peak; a three-year PCP deal with a 10 per cent deposit works out at £712 per month.

Like the Hyundai, the Audi Q4 e-tron is a very recent newcomer to the segment – and it runs our winner close. Practicality is staggering for the car’s modest footprint, and on the move it’s comfortable and easy to drive. However, the Q4 must play second best to the Ioniq because it can’t keep up with its more advanced charging tech.

It’s staggering to think that the Model 3 seems like an old-timer in this segment now, such is the rate of progress. However, it remains tough to beat in some areas – in particular the ease of access to its Supercharger network, and its huge touchscreen display. Elsewhere, it doesn’t quite feel as sophisticated as the newest rivals, though.