Power Day May Be VW\u2019s Version of Tesla Battery Day 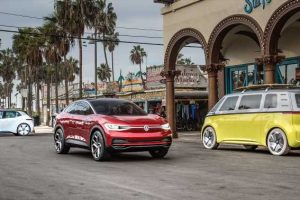 Tesla has made its annual Battery Day a spectacle for the brand’s fans, one that usually pays dividends. It manages to be a popular event even absent any new car reveals. A number of Volkswagen executives have given Tesla plenty of compliments over the years for the things its has pioneered, so perhaps it should come as no surprise that VW is planning something called Power Day scheduled for March 15 at 1 p.m. Central European Time, which is 7 a.m. ET here in the States.

A brief teaser video posted ahead of the event provides plenty of highway billboard-size hints that it will be about batteries—while also admitting outright that it will not be a car presentation. This gives EV fans plenty of time to stock up on popcorn and speculate about what VW could have in store.

To be fair, VW has already previewed a number of its upcoming EVs well in advance, aping another popular Tesla move, that of making announcements that take years to materialize. The last such preview took place just five days ago when VW previewed the Project Trinity flagship, due to arrive in 2026 with Level 2+ autonomous capability, and that could be upgraded to Level 4 by the end of the decade.

Power Day also comes a few days after Wolfsburg spelled out its Accelerate strategy, that outlines the automaker’s EV rollout through the end of the decade: VW aims to have 50% of its US offerings be electric by the year 2030, and 70% in Europe. Another part of the strategy includes the launch of over-the-air updates—once again a feature popularized by Tesla—with VW aiming to release them every 12 weeks starting this summer.

When it comes to battery development, however, VW has kept mostly silent over the past year. One clue could be VW’s collaboration with QuantumScape, a California-based battery tech developer that recently announced its solid-state battery design will be ready for mass production in 2024. It’s also promising a much greater energy density compared to traditional lithium-ion batteries currently found in EVs, among other distinct advantages.

VW’s Power Day could spell out just when we could see solid-state battery technology in its cars. It has already dropped a hint in that direction with Project Trinity’s promise to offer “new standards in range, charging speed, and digitalization.” We’ll have to wait a few days to find out whether this mean Project Trinity will see solid-state batteries in 2026 or advanced lithium-ion tech.

In any case, it’s clear that 2021 is the most important year for the group when it comes to EVs, with new entries due from Skoda and Cupra, as well as the launch of the ID.4 stateside.

Will you tune in for VW’s Power Day announcement? Have you ever been excited about Tesla’s Battery Day? Sign up to leave comments and let us know.