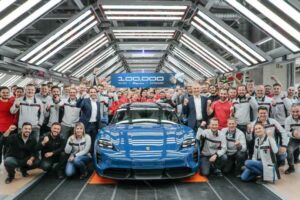 Porsche signaled its intentions toward hopping on the electric bandwagon back in September 2015 at the Frankfurt Motor Show where it unveiled the Mission E concept. It wasn’t until September 2019 when series production of the road-going Taycan commenced, and a little over three years later, the 100,00th EV has been assembled. A Turbo S painted in Neptune Blue, the milestone car was assembled on November 7 and is heading to a customer from the UK.

Porsche mentions the US, China, and the UK / Republic of Ireland are the Taycan’s most popular markets. Delivers have slowed down this year due to supply chain bottlenecks, with 25,073 EVs shipped to customers in the first nine months of the year, or 12 percent less than in the same period of 2021. The peeps from Zuffenhausen say these delays haven’t slowed down demand for the electric sedan/wagon duo as the order book “remains large.”

Coinciding with the news about the production milestone are details about a few high-mileage examples. Transport entrepreneur Jean-Hubert Revolon bought a Taycan 4S in mid-August 2020 and has already racked up 188,119 kilometers (116,891 miles). He lives in France in the Lyon area and often drives to neighboring countries, covering as much as 1,200 km (746 miles) in a single day.

Guillaume Takvorian, a pharmacist from Marseille, also owns a Taycan 4S since June 2020. He has managed to cover 113,977 km (70,822 miles) during his business trips to the south of France. He also happens to own a 911 Targa and likes how its gasoline engine sounds, although he also enjoys the silence of the electric sedan during long trips.

Another relevant example comes from within Porsche as the company’s Head of Body Planning, Markus Kreutel, did 134,911 km (83,830 miles) in a Taycan Turbo company car between February 2021 and August 2022. Daily distances of up to 1,500 km (932 miles) haven’t been an issue for the performance EV during his business trips that frequently involved traveling from Zuffenhausen to Slovakia or the Ore Mountains.

The journalists at Auto Bild have also smashed the 100,000-km barrier with a Taycan 4S in an endurance test that started on October 17, 2020, and ended earlier this month. Speaking of German magazines, Auto Motor und Sport recently took delivery of a Cross Turismo 4 for its long-term test fleet with the goal to cover 100,000 km (62,137 miles) over a maximum period of two years.

What’s next for the Taycan? Well, recent spy shots are suggesting Porsche is working on a higher-performance version to take on the Tesla Model S Plaid.