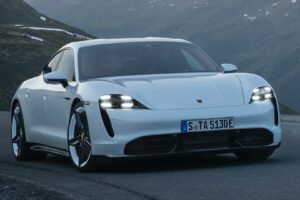 The Porsche Taycan is expected to be facelifted for the 2024 model year. The electric sedan will receive a minor styling update, with new larger headlights and a slightly updated bumper design. The general exterior and interior design of the car is expected to remain the same however, meanwhile range and power numbers should also be similar to existing figures.

The facelifted Taycan was spotted in testing in Germany with minimal camouflage. As you can see from the below image, the front fascia will be altered slightly.

Porsche typically facelifts its cars after four years, with an entirely new model arriving after eight. The Taycan first went on sale in late 2019, meaning a facelift is due in late 2023/early 2024. And as we previously reported, the next-generation Taycan is slated to arrive in 2027.

Although the Taycan lineup is expected to remain unchanged for the 2024 model year, a new variant could be added with the refresh. An aggressive, winged Taycan prototype was recently spotted taking on the Nürburgring. It’s rumored this could be the Taycan Turbo GT. The Turbo GT nameplate was used for the first time on the Cayenne last year and describes the model that sits above the Turbo S.

What would a Taycan Turbo GT bring to the table? A tri-motor powertrain and over 1,000 bhp, potentially. The Taycan Turbo S is already the fastest electric car around the Nürburgring, however a GT version would undoubtedly look to better its 7-minute 33-second lap time. In terms of pricing, given the Turbo S currently retails for $187,400 a Turbo GT variant would likely cost in excess of $200,000.