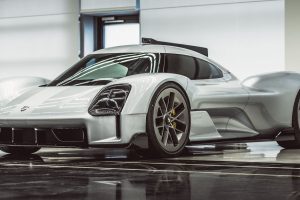 For every car that makes it to production, there are several more that end up on the design studio cutting floor, never seeing the light of day. Now, however, Porsche’s more fanciful ideas are getting their time in the sun as Zuffenhausen is revealing some of its design studies (and possibly the next Macan, as you would’ve read yesterday) for the first time.

All told, the company is showing 15 cars that span 14 years, from 2005 to last year. These stillborn products have been detailed in a new book, Porsche Unseen, and will also be shown at the Porsche Museum next year. Kicking things off are three of the latest examples from the Weissach studio, offering an extraordinary look at what could have been.

The most outlandish of these is the 919 Street, an obvious attempt at harnessing the technology from the prodigious, race-winning 919 Hybrid for the road. This 1:1-scale clay model, built in 2017, has the same dimensions as the prototype and was envisaged to feature the carbon monocoque and 900 PS hybrid powertrain that helped the works team bag three consecutive Le Mans victories. It’s certainly an interesting car, not least because it shows that Porsche was at least considering building an extreme top-level hypercar, in the same vein as the Aston Martin Valkyrie and Mercedes-AMG One. It also hints at an alternative universe in which the company is still participating in top-flight endurance racing, as the World Endurance Championship (WEC) is shifting to a road car-based hypercar formula next year.

The next car on the list is the 2019 Vision Spyder, a mid-engined roadster inspired by the 550-1500 RS Spyder of 1954. Classic details like the red body striping, period Mobil pegasus logos, rear fins and engine cover louvres are interspersed with modern touches such as the rectangular headlights, slim full-width taillights and skeletal rollbar. The car you see here is a 1:1 hard model.

But perhaps the most curious creation is the Renndienst, a 1:1 hard model that was built in 2018. The name translates to “racing service” and this one-box “space shuttle” was inspired by the original Volkswagen Transporter vans used by Porsche’s race team. The proposal included an all-electric powertrain and up to six seats, with the driver sitting in the centre McLaren F1-style.

As a design graduate myself, it’s refreshing to witness a part of the automotive development process that is rarely seen, in which designers build countless models that mostly end up scrapped. Showing these concepts to the public does, however, consign them to the fate of never receiving the green light, which is a shame. Which one of these cars would you like to see come to life? Sound off in the comments after the jump.