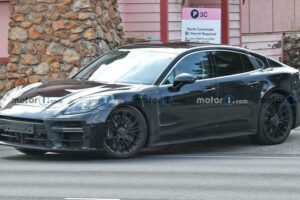 Center Lock wheels aren’t typically used on street-driven cars. They require considerable torque to secure and as such, they aren’t easily removed should you get a flat. The design is beneficial for racing, as the smaller center lock hub means more room for big brakes. Porsche uses center lock wheels on extreme versions of the 911 like the GT3 and Turbo S, but we’ve never seen such tech on the considerably larger Panamera sedan. Until now.

To be clear, the vehicle captured in these spy photos isn’t a production model. It’s clearly a prototype with updated bodywork concealed by black tape and camouflage panels. There’s also a chance this is a test mule, evaluating center lock hubs for use on another model. But we also must consider the possibility that Porsche is cooking up a supremely hot Panamera sedan to join the next-generation lineup. That’s a tantalizing proposition considering the current Panamera already approaches 700 horsepower (522 kilowatts) in Turbo S E-Hybrid trim.

These aren’t faux wheels designed to look like center locks, either. Our spy photographer captured multiple images from the side with the car in motion, then a couple more with it parked. The spoked wheels don’t resemble anything else we’ve seen on prototypes, be it previous Panamera spy shots or the soon-to-come 911 GT3 RS. What’s more, there are some properly massive brakes behind those wheels. It leads us to ask the obvious question: Is Porsche planning a Panamera GT3?

A new Panamera generation is coming, and it will borrow styling cues from the electric Taycan. Extensive changes to the front and rear are still cleverly hidden with this test car, but if a GT3 is in the mix, we’ve yet to see any wild aerodynamic changes that usually come with the moniker. Sadly, the windows are quite dark so we can’t see much inside. Though it’s possible there’s a roll cage mounted in the back.

A Porsche Panamera GT3 could rival the likes of Jaguar and Mercedes-Benz for the title of fastest sedan around the Nurburgring. We know how much Porsche loves ‘Ring records, so there’s certainly a motive to make such a super sedan happen. We likely won’t have any answers until next year at the earliest, when the new Panamera is expected to debut.

Enjoy more Porsche discussion in the Rambling About Cars podcast, available below.