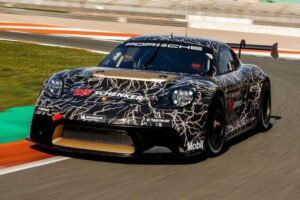 There’s no going back now – whether we like it or not, the future of Porsche’s smaller sports car is electric. Come 2025, the 718 lineup will lose its internal combustion engine and morph into an EV. The announcement was made back in March, but the writing had been on the wall since last September when the Mission R arrived at the IAA Munich in Germany. The concept has now transitioned to a running prototype, dubbed 718 Cayman GT4 ePerformance.

Much like the 2021 Mission R before it, the test car borrows its chassis from the track-only 718 Cayman GT4 Clubsport. The electric motor and battery pack have been sourced from last year’s concept, meaning the “baby Porsche” has a maximum output of 986 horsepower (735 kilowatts) in qualification mode. It delivers a constant 603 hp (450 kW) for 30 minutes or the duration of a Carrera Cup race.

Porsche has conducted a performance analysis and it showed the electric machine’s lap times and top speed were almost the same as the 911 GT3 Cup’s. The dual-motor 718 Cayman GT4 ePerformance uses 900-volt technology and can charge the battery from 5 to 80 percent in only 15 minutes. Even though it’s based on an existing car, some 6,000 parts had to be developed for the electric racer, which is a considerable 14 centimeters (5.5 inches) wider.

Riding on 18-inch Michelin race tires largely making use of renewable materials, the electric racer has an eco-friendly body in the sense that it uses natural fiber composites to cut emissions compared to a body produced from synthetic materials. Porsche even used recycled carbon fibers to show even a race car can be engineered with sustainability in mind.

The subsequent production version is due roughly three years from now, and in the meantime, the 718 Cayman GT4 ePerformance will get its first outing in June. Porsche will bring the sporty EV to the Goodwood Festival of Speed where it will go up the famous hill. Its itinerary also includes paying a visit to Porsche factory in Leipzig on August 20 to mark the plant’s 20th anniversary.

Two examples of the zero-emissions machine will travel to various European venues prior to arriving in North America at the beginning of 2023. The world tour will come to an end by the middle of 2024 after visiting countries from the Asia-Pacific region.

Meanwhile, the road-going Cayman GT4 RS is not the end of the line for the ICE-powered 718 family as Porsche is plotting an equivalent Boxster Spyder RS.