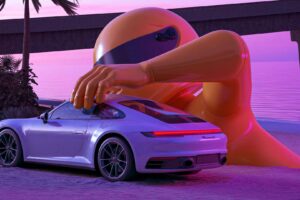 If you happen to be in Miami, Florida, keep an eye out for a giant race car driver playing with a Porsche 911. It’s a sculpture by Chris Labrooy that’s on display at the Pérez Art Museum Miami from November 29 to December 3.

Labrooy calls the sculpture Dream Big, and it’s part of Porsche’s larger The Art of Dreams initiative. This is the first time one of the exhibits in this project is on display in North America.

Dream Big is supposed to evoke playing with toy cars as a child but enlarges that look to giant proportions. The yellow race car driver is holding the roof of a real Porsche 911 Carrera 4S. Porsche says the sculpture is an “anchor point” to something the company plans to do in the virtual world in the future. There are no more details about what’s coming.

“In the US, the best way to reach the art and design community is during Miami Art Week, when the creative heart of the world is beating in Florida. We’re excited to be making our first appearance there,” said Robert Ader, Chief Marketing Officer at Porsche.

Porsche started The Art of Dreams exhibits in October 2021. The first installation was in Paris and consisted of giant air-filled elements by French artist Cyril Lancelin. At Milan Design Week, Ruby Barber displayed the sculpture Everywhereness that consisted of wild roses and a 1972 Porsche 911 S.

Porsche frequently works with artists to use the brand’s cars as a canvas. For example, the company partnered with streetwear designer Sean Wotherspoon to customize a Taycan 4 Cross Turismo for South by Southwest in Austin, Texas. It featured a multi-colored body in pastel shades and a similarly kaleidoscopic palette.

Similarly, Japanese artist Shun Sudo painted a Porsche Taycan. He started with a white car and covered it in colorful flowers with shades of red, pink, yellow, and orange. The brand displayed the vehicle in Tokyo, Nagoya, and Osaka.