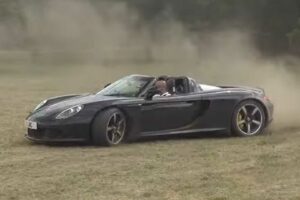 A slippery surface and a supercar are typically not a great combination since less-than-ideal traction can easily cause the high-powered machine to spin out of control. However, power sliding on the grass in an enclosed area is a lot safer, especially if the person behind the wheel knows what they’re doing. Some high-end vehicles did a bit of dancing, but the police weren’t too happy about their driving shenanigans.

YouTuber TheTFJJ caught all the action, starring an impressive collection of desirable cars. The black Porsche Carrera GT would be our pick of the bunch, but we also see a couple of Ferraris such as the SF90 Stradale and 458 Special Aperta doing donuts to the delight of the bystanders. One rather exotic appearance is represented by the Lancia Delta S4, a mid-engined, all-wheel-drive rally car that raced in the final years of the ill-fated Group B era.

The least exciting car of the lot happened to be an EV, specifically a BMW i3 police car that decided to interrupt the drivers from having a bit of innocent fun. The V10-powered Carrera GT wasn’t the only high-revving supercar that day as we can also see a Ferrari 599 GTO with its 670 horsepower unlocked at a screaming 8,250 rpm. With only 599 ever made, Maranello’s beast is actually rarer than the targa from Zuffenhausen where 1,270 units were assembled.

Although they’re not in their natural element, on a circuit being pushed hard, it’s refreshing to watch expensive and rare cars being used without the drivers worrying about damaging their prized possessions. It’s not every day we see a CGT kicking up dust courtesy of its tail-happy nature. We can say the same thing about the 911 GT3 RS, albeit the driver seemed to be more careful with his track-focused beast.

While the police did force the drivers to stop trashing around their vehicles, it was only for a brief moment as it didn’t take long until the supercars were back dancing on the grass.