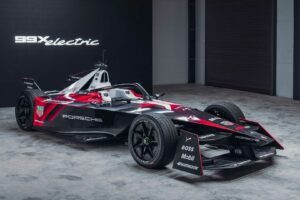 As Porsche moves into a fourth season of competition in Formula E, the brand introduces the updated 99X as its machine for the new Gen3 rules. The open-wheel machine has a competition debut at the Mexico City E-Prix on January 14, 2023.

The Gen3 cars have a huge powertrain change. Manufacturers can engineer their own rear motor producing up to 469 hp (350 kW), which is up from the 335-hp (250-kW) power limit for the Gen2 machines. Formula E estimates the more powerful Gen3 machines can reach 200 miles per hour, rather than 174 mph from the previous vehicles.

Plus, there’s now a motor at the front axle, but it doesn’t drive the wheels. Instead, the setup adds regenerative braking power. In total, the 99X can recuperate 600 kW – 250 kW in front and 350 kW at the tail. This is up from 250 kW for the Gen2 racers.

The Gen3 cars don’t have traditional rear brakes. Slowing down the back wheels happens purely from the electric motor’s regen phase.

The spec battery capacity is now 38.5 kilowatt-hours, which is down from 52 kWh from the previous generation of racers. This change contributes to the new vehicles weighing less and being more agile.

The battery supports very fast recharging. When plugging in during a 30-second pit stop, the pack can regain 4-5 kWh, according to Inside EVs.

The 99X’s design looks more like a traditional open-wheel race car. The big fairings over the front wheels are gone. The wing on the nose has a more complex shape with multiple planes and tall endplates. At the back, there are tall, angled sections of bodywork and a low wing.

The series rules stipulate a shorter wheelbase and narrower track than the previous generation of machines in Formula E. The vehicles’ minimum weight with a driver is now 1,852 pounds (840 kilograms), which is down the previous 1,984 pounds (900 kilograms)