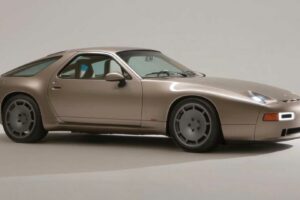 Nardone Automotive teases its Porsche 928 restomod that gives the V8-powered grand tourer retro-modern aesthetic touches and a major power boost. The company plans to build eight Launch Edition examples with an asking price of €480,000 (excluding value-added tax and a donor vehicle). The first customer deliveries should be in 2024.

Nardone uses a 928 S4 as its donor vehicle. The modified coupe retains the general look of the original but replaces the body panels with carbon-fiber pieces. There are several subtle styling tweaks, too. The front fascia features rectangular driving lights and a series of tiny inlets on the tip of the nose. The pop-up headlights are still present, but the lamps are now LEDs in exposed carbon-fiber surrounds.

This 928 rides on forged 18-inch wheels, rather than the original 16-inch diameter, but with a similar design. Michelin Pilot Sport 5 tires wrap around them.

Power continues to come from a naturally aspirated V8, but Nardone pushes the output to 400 horsepower (298 kilowatts). For comparison, the most powerful 928 ever available from the factory in the United States had 350 hp (261 kW). Rather than the original five-speed manual, this one now has a six-speed manual with a limited-slip differential.

Nardone reupholsters the 928’s cabin in a mix of brown Foglizzo leather and Alcantara. The center console has a contrasting, brushed metal appearance with a Porsche Classic Management infotainment system on the bottom. The dashboard is retrofuturistic with a digital speedometer using a pixel display.

Nardone’s 928 is currently on display at Milan Design Week. After that, the company will show it at the Goodwood Festival of Speed.

Production of the 928 started in 1977. For a while, Porsche thought the V8-powered grand tourer might even be a replacement for the aging 911 in its lineup. While usurping the brand’s most famous creation never happened, the 928 lasted in the automaker’s lineup until 1995.