Porsche 911 GT3 Facelift Spied On The Nurburgring With Redesigned Rear 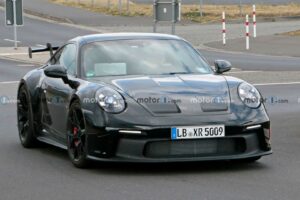 Work on the refreshed Porsche 911 family continues and we have a new batch of spy photos showing the updated 911 GT3. The performance model is currently undergoing pre-production evaluations and our spy photographers caught a prototype lapping the Nurburgring. Interestingly, almost the entire vehicle was not camouflaged but that doesn’t mean there were no visual changes over the current model.

The front fascia appears to be completely camouflage-free in the photos but the rear end has some black tape covering portions of the bumper. Additional fake body panels attached to the bumper create a visually disturbing shape but, obviously, this is not the final form of the rear fascia. Additionally, there seem to be more changes to the rear diffuser – the vertical elements are larger and more prominent on the refreshed model.

The fact that there is no disguise to the front end doesn’t mean there will be no visual tweaks, though. We believe Porsche is in the early phases of development of the facelifted 911 GT3 (992) and the company keeps additional changes for the later stages of testing. As a side note, we spied the refreshed sports car for the first time in July this year when we spotted a different prototype with a slightly different rear fascia camouflage.

We have virtually zero details regarding the powertrain of the facelifted model. We believe the engine under that giant wing at the back will remain unchanged in general but could be tweaked to deliver a little more power. Currently, the 911 GT3 uses a naturally aspirated 4.0-liter flat-six engine that makes 502 horsepower (374 kilowatts) and 346 pound-feet (469 Newton-meters) of torque. It can be mated to either a six-speed manual or a seven-speed dual-clutch gearbox.

Just recently, Porsche unveiled the new 911 GT3 RS with a hardcore aerodynamic package and a more powerful iteration of the 4.0-liter engine. In this application, the flat-six mill produces 518 hp (386 kW) thanks to new camshafts with modified cam profiles, featuring a motorsport-derived single-throttle intake system. It will be interesting to see what upgrades the updated 911 GT3 (without the RS) will get and if there will be components borrowed from the RS model.