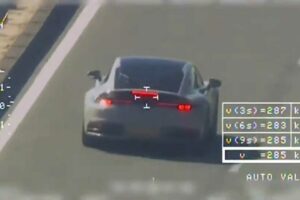 Likely someone who thinks “I paid for the whole speedometer, I’m gonna use the whole speedometer,” the driver of a Porsche 911 was seen doing 177 mph (285 km/h) on a highway in Spain. For reference, the speed limit on the Autovía A-6 in El Espinar is 75 mph (120 km/h). A speed camera mounted inside a police helicopter clocked the driver doing more than double the speed limit, and yet he refused to pull over.

Eventually, he was apprehended by a traffic patrol in the municipality of Arévalo. Irish Mirror cites local radio COPE saying the Porsche 911 driver was arrested for being an “alleged perpetrator of an alleged crime against road safety.” A driver exceeding the speed limit in Spain by over 50 mph (80 km/h) risks losing their license for four years and even jail time.

On the very same section of the road, 28 accidents have been reported so far this year, resulting in two fatalities and 11 injured people.

While most high-end cars come with a top speed limiter programmed to kick in at 155 mph (250 km/h) for safety concerns, Porsche does things differently. In an interview in 2019, company boss Oliver Blume said there won’t ever be a Porsche with a speed limiter:

“Our drivers can drive as fast as they feel they are able to drive. For us, it plays a big role to our customers on race track days, with the Porsche Experience Centres, too.”

On the other hand, Volvo is now selling cars limited from the factory to 112 mph (180 km/h). A while back, senior safety specialist Jan Ivarsson at the Swedish brand said:

“As humans, we all understand the dangers with snakes, spiders, and heights. With speeds, not so much. People often drive too fast in a given traffic situation and have poor speed adaption in relation to that traffic situation and their own capabilities as a driver. We need to support better behavior and help people realize and understand that speeding is dangerous.”

Since Volvo’s decision, Renault and Dacia have followed suit.