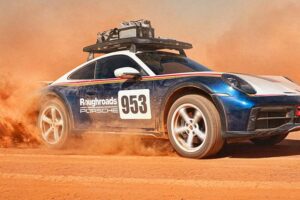 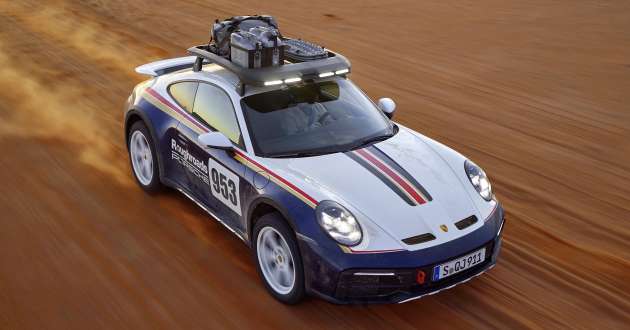 Porsche has unveiled the 911 Dakar at the Los Angeles Auto Show, a limited-edition variant capped at 2,500 units that celebrates the sports car manufacturer’s first overall victory at the 1984 Paris-Dakar Rally that also marked the first application of all-wheel-drive in the 911. The ‘953’ on the doors of the example shown here is actually the designation given to that heavily modified 1984 Porsche 911.

Key to its cross-country rally design brief is its more generous ground clearance, which is 50 mm greater than that of a sports suspension-equipped 911 Carrera. The 911 Dakar comes with a suspension lift system as standard that increases ride height at the front and rear of the car by a further 30 mm, gifting the 911 Dakar with ground clearance and ramp angles which rival those of conventional SUVs, says Porsche.

The lift system for the 911 Dakar isn’t merely for crawling over particularly difficult obstacles, but rather it is an integral part of the car’s all-terrain capable chassis; the taller ride height position can be used for ‘ambitious off-road adventures’ at speeds of up to 170 km/h, it says.

Incidentally, its outright top speed is limited to 240 km/h due to its standard all-terrain tyres, which are Pirelli Scorpion All Terrain Plus units measuring 245/45ZR19 in front and 295/40ZR20 at the rear. These feature 9 mm-deep tread and reinforced sidewalls, and consists of two carcass plies, making the tyres highly cut-resistant. Customers can also opt for Pirelli P Zero summer or winter tyres, both also with two carcass plies, however the Scorpion AT tyres offer sports car dynamics to begin with, Porsche says.

Powertrain for the 911 Dakar is the marque’s 3.0 litre twin-turbo, horizontally opposed six-cylinder engine producing 480 PS and 570 Nm of torque in peak outputs, transmitted to all four wheels via an eight-speed PDK dual-clutch automatic gearbox; elsewhere in the 911 range, this is most akin to the Carrera 4 GTS with the PDK gearbox.

Further standard equipment on the 911 Dakar include rear-wheel steering, engine mounts from the 911 GT3, PDCC anti-roll stabilisation and more.

Unique to the 911 Dakar are two new driving modes; Rallye for loose, uneven surfaces which deploys rear-biased torque distribution for the AWD system, and Offroad, which automatically activates the high ground clearance position and configures the driveline for maximum traction on difficult terrain, including sand. Both modes feature the new Rallye Launch Control which optimises acceleration on loose surfaces, allowing wheel slippage of up to 20%.

In terms of bodywork, the fixed rear spoiler and front luggage compartment lid are both made of carbon-fibre reinforced plastic, the latter taken from the GT3 with its dual air vents. Wheel wells and sills area widened on the 911 Dakar, while the side air intakes within the front bumper gain stainless steel grilles for added protection against flying rocks and debris when traversing off-road terrain at speed.

The roof of the 911 Dakar features a 12-volt power outlet that powers the light units in the optional roof rack seen in these images. This rack has a capacity of 42 kg, accommodating off-road necessities such as shovels, traction boards, fuel and water canisters and more; a roof rack is also optionally available for the 911 Dakar.

Inside, the rear seats have been omitted from the 911 Dakar, and the two occupants sit in fixed bucket seats as standard, such as those in the GT3 RS and GT2 RS. Joining these weight reduction measures are lightweight glass and a lightweight battery, enabling the 911 Dakar to tip the scales at 1,605 kg, or 10 kg more that the 911 Carrera 4 GTS PDK that it has adapted its drivetrain from.

Further options include the Rallye Sport Package that brings a roll-over bar, six-point seat belts and fire extinguisher. Meanwhile for aesthetics, the Rallye Design Package brings the styling as seen on the blue-and-white car here, using a two-tone scheme of white and Gentian Blue Metallic that is paired with the decorative foiling. The customer can choose a racing number for the doors, ranging from 0 to 999.

Rounding up the feature set for this special-run Porsche 911 is a choice of not one, but two Porsche Design special edition watches exclusive to buyers of the 911 Dakar. Customers may choose from either the Porsche Design Chronograph 1 – 911 Dakar or the Chronograph 1 ? 911 Dakar Rallye Design Edition, and each uses a case made of scratch-resistant titanium carbide.