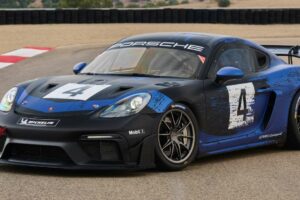 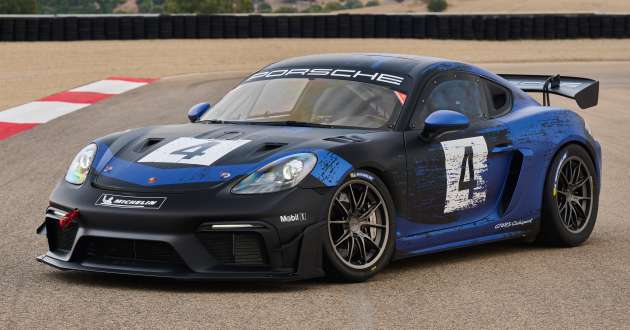 Thanks to an optimised air intake, peak power is achieved at 8,300 rpm – 800 rpm higher than the GT4 Clubsport – and the engine revs all the way to 9,000 rpm. It also makes 465 Nm of torque at 6,000 rpm instead of the previous 425 Nm at 6,600 rpm, which Porsche says results in a much wider and usable speed band that makes the car much easier to drive for professional racers and amateur drivers alike. For the sake of comparisons, the 911 GT3 Cup has slightly higher outputs of 510 PS (503 hp) and 470 Nm.

The engine is paired with a dual-clutch PDK transmission that has seven forward gears instead of the GT4 Clubsport’s six – all gears feature shorter ratios too. The carmaker says that depending on the track and series-specific regulations, its new race car can achieve lap times that are over 2% quicker than the previous model.

Other modifications include totally revised dampers that “achieve an optimised vehicle responsiveness and a further improvement in body control.” There are also two-way adjustable shock absorbers with improved characteristics as well as adjustable sword-type anti-roll bars front and rear.

The car also has many other adjustable parameters, including vehicle height, camber and toe, while there are three different spring rates available. The car also comes with a motorsport-specific Porsche Stability Management System (PSM), which includes a switch to modify the traction control (TC), ABS and an updated stability control system.

The NACA ducts on the bonnet are similar to those on the road car and channel air more efficiently to cool the large racing braking system fitted with 380 mm steel discs, joined by fender louvres to relief pressure within the wheel wells.

Additional aerodynamic elements come in the form of front dive plans and an extended front spoiler lip to increase downforce at the front axle. These are accompanied by a fully enclosed underbody that sends air to the rear diffuser, while the swan neck rear wing has been given a 20 mm long Gurney flap and an adjustment range extended by two additional stages. The previous GT4 Clubsport used flax-based fibre as an alternative to carbon-fibre composite, and the sustainable material is now used more extensively with the GT4 RS Clubsport. Not only are the doors and rear wing made out of the material, so are the bonnet, the wings, the aerodynamic components at the front end and the steering wheel.

There’s also a FT3 safety fuel cell with a capacity of 115 litres, so endurance racing is possible, and Porsche offers two different exhaust systems to allow the car to compete at tracks with stricter noise limits. The vehicle is also prepared should teams want to add homologated headlamps or openings in the bonnet for fast refueling.