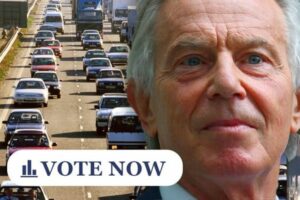 Ex-Prime Minister Tony Blair has claimed that Britons’ dependence on cars comes with “real downsides to our environment and quality of life”, and that “transportation policy needs to acknowledge the central role of the car, both now and in coming decades”. Mr Blair has proposed four new road tax options for government consideration.

The first suggests drivers should be charged a flat-rate per mile, after a ‘free allowance’ of miles. The flat rate could vary by vehicle weight and fuel consumption to reflect the trip and vehicle’s greenhouse-gas and air-pollution impact.

His second idea was to introduce more congestion area charges, like the one currently in operation in London. Stockholm, Oslo, Bergen and Gothenburg also use systems that charge vehicles each time they enter different zones. Mr Blair suggested that the charges should depend on the time of day and could be capped at a daily maximum.

Another suggestion proposed a ‘time-based system’ where drivers are charged based on the amount of time spent driving. He argued that it would incentivise people to avoid congested roads, but he acknowledged that it could incentivise speeding.

Mr Blair’s final idea is based on a charge-per-journey model, whereby drivers log their journey into an app on their phone or through a built-in device, and a real-time cost is taken from a prepaid account. Similar to how people use Uber services today. Though, he said this option would have “the biggest privacy impacts”.

Experts at FairFuelUK have attacked the proposals warning the updates would “hit the economy hard”.

They said: “Road pricing will go down like a lead balloon with the world’s already highest taxed drivers unless the Treasury and the Department for Transport substantiate we’ll not be paying any more tax than now.

“Plus, big brother must never track our vehicle’s every move.”

Do you agree that a charge-per-journey app-based model would invade citizens’ privacy too much? Vote now.

FairFuelUK experts added: “Controversially as Fuel Duty revenue plummets, all road users will have to contribute fairly to the Exchequer, which means electric vehicles and cyclists paying tax too.”

The Tony Blair Institute for Global Change believes it is essential to act now and change the road tax system for the benefit of the local and global environment, and because of the ban on the production of petrol and diesel cars, that will come into force in 2030.

He argues that car usage exacerbates societal inequalities, because “the poorest people in our society are much less likely to own cars but are more exposed to the associated problems, such as air pollution”.

Mr Blair also points out that the growing popularity of electric vehicles is making the road tax system unfair on drivers.

Firstly, those who own electric vehicles only pay a nominal amount of tax compared to petrol and diesel drivers, and those who can afford to buy new electric cars are most likely to come from wealthier backgrounds.

He says that this is because “our system of taxing car usage is based around taxing fossil fuels” and makes “running a Battery Electric Vehicle is almost tax-free, and as a result much cheaper to drive.”

When taking into consideration the cost of petrol, fuel duty and Vehicle Excise Duty (VED), the overall cost of running an electric car is 71 percent lower, and the amount paid in tax is 98 percent lower.

It is around £1,100 per year to run the average petrol or diesel car, whilst the total comes to just £320 for an electric vehicle.

Mr Blair argues that the rise in electric cars will increase congestion because “a collapse in the marginal cost of driving” will make “the amount of time we waste in traffic to rise by up to 50 per cent”.

He also predicts that taxes will rise across the board as fuel duty tax will be lost due to the transfer to electric cars.

The Department for Transport said changes to the tax system are currently being considered by the Chancellor but are yet to be confirmed.

Let us know your stance in the comments section below.