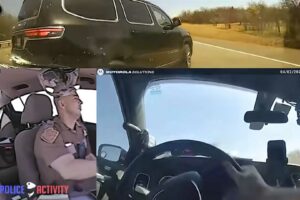 In this case, the term staying cool under fire is a literal description of the video featured above. It shows approximately two minutes of a dramatic high-speed pursuit in which an armed robbery suspect shot at an Oklahoma Highway Patrol officer. The video ends with the trooper spinning the SUV off the road, but sadly, it’s not the end of the story.

The incident occurred on April 2, as posted in the video description by the Police Activity YouTube channel. The Oklahoma Highway Patrol was notified of an armed robbery suspect driving a black SUV, which we can see was a new Jeep Grand Wagoneer. The vehicle was spotted but the suspect refused to stop for troopers, leading to the pursuit on highways near Oklahoma City.

The video features three camera angles from Trooper Brack Miller, who starts dodging bullets around the 24-second mark. Another shot is seen around 50 seconds in, followed by a failed PIT maneuver attempt which Miller calls “ugly” in a surprisingly casual tone,  considering he’s being shot at. The footage then jumps to a later portion of the chase, and now we see at least one bullet hole in the windshield of Miller’s Dodge Charger pursuit vehicle.

More shots and a second PIT attempt follow, but Miller’s third attempt sends the SUV spinning off the highway. Again, his tone sounds borderline nonchalant as he radios TVI TVI TVI, indicating a Tactical Vehicle Intervention which ended the pursuit. The video concludes with Miller stopping and surveying the damage to his car, at which point we clearly see two bullet holes in the windshield on the driver’s side. Yikes.

The pursuit was over, but the dangerous situation didn’t end there. According to a report from KFOR, the male suspect was armed with an AK-47 and barricaded himself with the SUV, exchanging gunfire with police that lead to a standoff along Interstate 44, shutting the highway down for several hours. Two police officers reportedly suffered injuries but are expected to make a full recovery. The suspect died at the scene.