Police In Japan Fight Crime With Collection Of 17,000 Car Brochures 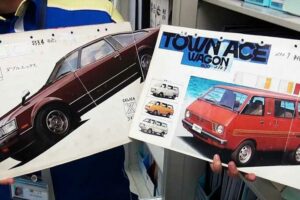 Let’s have a quick show of hands, and by that, we mean a quick mention in the comments at the end of this article. How many of you have at least one car brochure among the various auto-themed items in your household? Maybe it’s new, maybe it’s old, and just maybe, you have a lot of them. Car crazy collectors love brochures, but a police agency in Japan could have the craziest collection at all.

That is, provided you consider 17,000 vehicle brochures crazy. Wait, what?

It’s true, according to The Asahi Shimbun. Japan’s Aichi Prefecture is home to one of the largest metropolitan areas in the world, and as such, it’s packed with cars. In pre-internet days, the Aichi prefectural police began collecting new car brochures for the purpose of identifying cars involved in crimes. It’s a process still used today, and after 40-odd years of brochure collecting, there are no less than 17,000 in their possession.

We’d love to spend hours upon hours perusing classic JDM brochures from the likes of Toyota and Honda, simply for the fun of it. But with 17,000, the collection isn’t limited to Starlets or City Turbos. The police department makes it a point to get brochures from automakers around the world, and that includes brochures for limited-production vehicles. After all, you never know when a VIP might crash his new Lamborghini Countach into a light pole and take off into the night.

Does such an archive even make sense in today’s digital world? The report says that neighboring police departments use the Aichi prefectural police brochure archive and are even creating archives of their own. And it works, as the brochures recently helped police identify a car that led to catching a hit-and-run suspect.

Beyond that, the brochure collection helps officers get to know vehicle makes and models, which can certainly come in handy during a chase. Directing backup to intercept a black two-door coupe could lead to some confusion. Identifying it as a black 2019 Porsche 911 GT3 RS with the Weissach package leaves nothing to the imagination. Plus, it sounds cooler over the radio than just saying coupe.

So, if you find yourself in Aichi Prefecture driving an obscure car, don’t try to escape the law. It’s possible they might know more about your car than you do.