After the two first months of 2020, Switzerland already enjoys a strong plug-in electric car sales expansion by 84% to over 3,000 new registrations.

The average plug-in market share is about 8% so far this year – significantly above the 5.5% noted during 12 months of 2019.

The results in Switzerland are an important example, as there are no significant incentives for EVs, just a huge wealth accumulated over centuries, which allows buyers to afford the latest electric models. Once EV prices will gradually decline, also other countries will be able to see similar market share without grants.

The most popular model is clearly the Renault ZOE (267 in February and 477 YTD), but the second-best Tesla Model 3 (80 in February and 226 YTD), is expected to narrow the gap in March.

It’s hard to judge the market after just two months, but the table probably will change a lot, as many well-selling new EVs didn’t even appear on the top 20 list. There is no Peugeot e-208 or Audi e-tron, for example. 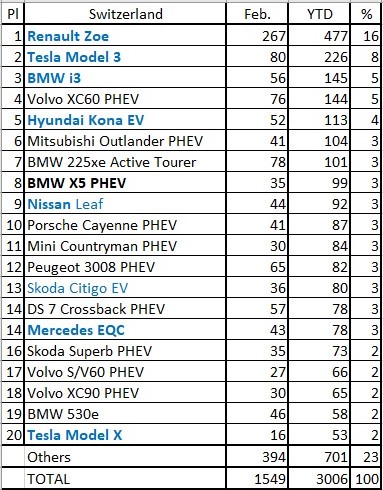