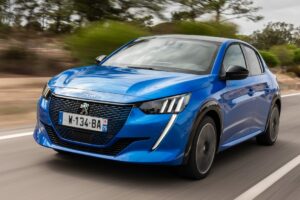 Peugeot has updated its e-208 and e-2008 EVs for 2022, making some small mechanical and spec changes that have resulted in an increased driving range for both cars.

From next year, the Peugeot e-208 will offer a maximum claimed range of 225 miles according to the WLTP cycle, which is around 14 miles more than before. Meanwhile, the e-2008 crossover’s range jumps by 15 miles to a new claimed maximum of 214 miles.

As both cars share the same powertrain, the brand’s engineers have revised the set-up’s final drive so the models use less energy on faster roads. Ultimately, this means the motor doesn’t need to spin as fast to maintain motorway speeds, which is better for energy consumption.

Lastly, Peugeot fitted the e-208 and e-2008 with a more efficient heat pump and a new humidity sensor at the top of the windscreen, which monitors the cabin atmosphere and automatically adjusts the heating system to protect the amount of energy in the battery.

Both cars also feature the same 50kWh battery and 134bhp electric motor as before, which means charging times will be identical.

When connected to a 100kW DC rapid charger, both cars will take on an 80 per cent charge in around 30 minutes. A full charge using a 7kW AC wallbox takes seven and a half hours.

The updates are set to be rolled out in Europe from the beginning of next year and, although as yet unconfirmed, we expect the UK market will follow closely behind.

Peugeot is already working on its model year updates for the e-208 and e-2008, and we expect these mechanical changes will be part and parcel of these adjustments for the UK market.