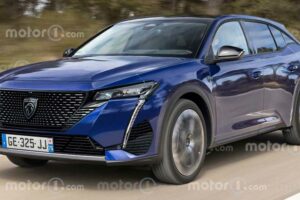 French automaker Peugeot is about to add another crossover to its lineup in the name of the 4008. Our spies have recently caught a production prototype while testing, providing us a good look at what the all-new model is going to look like. It will definitely be a coupe SUV, which has already become a trend among luxury marques and now trickling down to mainstream automakers.

With that, our artists tried to unwrap the camouflaged prototype and gave us a preview of the Peugeot 4008 coupe SUV. As the 4008 is said to be based on the 308-3008 duo, the rendering is also based on the 308 station wagon, albeit with obvious changes.

Based on the recent spy shots, the 4008 coupe SUV is expected to have considerable space from the ground. The future Renault Arkana rival will also have black plastic cladding outlining the bottom portions. The face, of course, will carry Peugeot’s current design language that shows a pair of huge LED “fangs.”

The biggest change here is found at the rear. As the 4008 will be a coupe SUV, the swoopy roofline should start to slope down right after the B-pillar. There’s also a kink right by the C-pillar that highlights the rear corner, which isn’t seen on the 3008 and the 308 hatchback/station wagon.

The 4008 designation is still unconfirmed at this point, though several reports insist so. As for the powertrain, Stellantis has left us some bread crumbs on its product roadmap for 2022, showing a “C crossover” with a plug-in hybrid powertrain. If this holds true, the Peugeot 4008 could debut this year with a PHEV setup, similar to the one found on the electrified 308 and its sister model, the new Opel Astra.

We suspect we’ll see more of the Peugeot 4008 as the company continues its testing. The launch date is still unknown as of this writing.