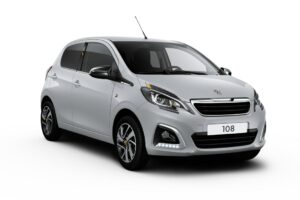 Peugeot has given the 108 a mild update in an effort to keep it competitive in the hotly contested city car class. Prices for the revised model start from £13,320, which is around £1,000 more than the Hyundai i10, but roughly £200 cheaper than the equivalent Volkswagen Up!

The Peugeot 108’s three-door body style has been dropped from the line-up, meaning buyers can now only have the hatchback as a five-door. Peugeot has also introduced two new paint colours across the range, called Ural White and Galaxite Grey.

The 108 line-up is separated into three models, called Active, Allure and Collection. The base model gets 15-inch steel wheels, air-conditioning and a seven-inch infotainment system with Apple CarPlay and Android Auto.

Mid-range Allure models are priced from £14,675, with upgrades over the base model including 15-inch alloy wheels, keyless go, a colour reversing camera and a pair of electrically adjustable and heated door mirrors.

The range-topping Peugeot 108 Collection is priced from £14,925. It also gets 15-inch alloy wheels but gains some new orange centre caps, while body-coloured door handles replace the car’s old chrome items.

Inside, automatic air-conditioning is fitted as standard, along with some orange interior trim and yellow stitching for the seats. The dashboard panels can also be matched to the exterior paint, providing you opt for Peugeot’s Smooth Green or Calvi Blue colours.

What does the updated Peugeot 108 have to beat? Check out our list of the best city cars on sale now…